Going from one of my biggest disappointments of Origins, Lorenzo il Magnifico to my biggest surprise of Origins….Whistle Stop!

Whistle Stop is a new game of managing and running an investment company in the realm of trains.  This seems to have been done to death and seems even more unlikely that anything new can be added to the genre.  Whistle Stop is not a deep, heavy game but is more on the lighter side….but don’t thing there is not strategy involved.  There is plenty of goodness here that makes it extremely immersive and unique.

Tile Laying!!  I love me some tile laying.  I love making the game area as the game plays along.  Grant and I were talking on the way to Origins about how games now a days need modular boards.  It just enhances the additional game plays and keeps a game fresh.  There are very few things that will be the same on the board when playing Whistle Stop.  The other cool thing is that you CHOOSE when you want to put out new tiles.  You aren’t forced to play on each of your turns.  There are plenty of different tiles each having specific resources, actions, companies you can invest in, and sometimes just new tracks.  Beware though, the special tiles with the black background lose you 10 points each if you don’t play them by the end of the game. 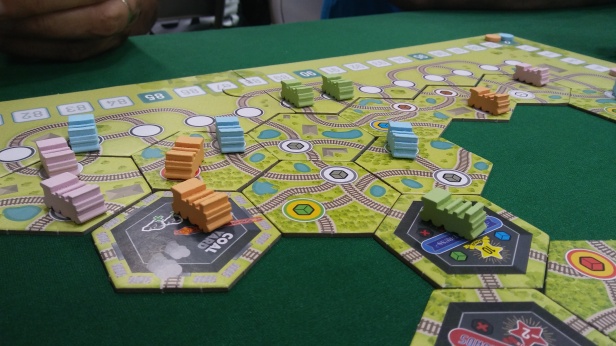 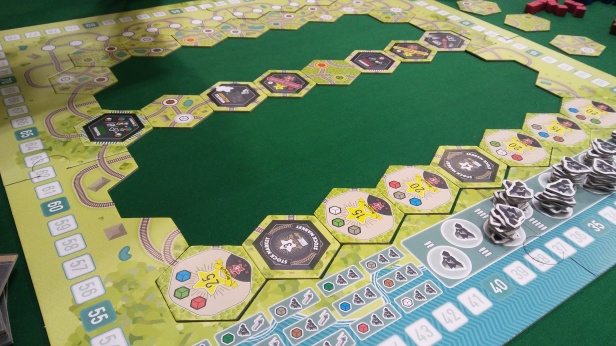 Uniqueness!  Not just the feel and the game being unique but you also get ability tiles to upgrade your trains to make them different from other players giving you an advantage.  I love games that provide you the opportunity to maximize your strategy and make yourself unique from others.

Multiple Strategies!  As we were playing the game, only 4 rounds out of 10, we were already discussing the different strategies that could possibly be explored to win.  Going after 2-3 companies to make sure you get the points, or retiring you trains the fastest to get bonus points, or having an in game engine to bounce from one point scorer to the other and racking up as many points as possible during the game.  There are a lot of different strategies to explore and focus on, which will provide different opportunities with each play.

Multiple Plays Advantage:  The only negative I can think of for this game is that players that have played before have the advantage over new players.  This will definitely take a couple plays to see the intricate strategies and over all playing feel.  About half way through the game a new player will say “Okay, I know what I did wrong.”

This game is a must buy for me.  It scratches an itch somewhere between an 18xx game and Paris Connection, and that is something that just sings to me.  There are so many things I like about this game that I just can’t pass it up.  This is my biggest hit of Origins and can’t wait to add it to my collection.  Upon hearing this announced, I thought to myself “Oh, another train game”, but after only playing a quarter of one game and seeing what is here……I NEED IT!