April Showers bring May flowers. Sadly, those flowers end up being poppies in times of war. Where poor and severe weather plagued Europe throughout the month of April, Fair weather prevailed in May in both the Warm and Mild zones, which is basically everything in central and southern Europe.

The biggest occurrence in May 1940 was the collapse of Belgium, the last Bulwark between German Forces and mainland France. I say the last like the Maginot line doesn’t exist, but come on, we all know how that ended up.

The German 12th Army Finally retook Amsterdam, they initiated a couple of mobile attacks and drove the French into the sea. The Germans then moved up into Rotterdam to capture more ports in Northern Europe.

The German 9th Army took on the French 9th Army on what would prove to be a decisive, and crushing axis offensive. 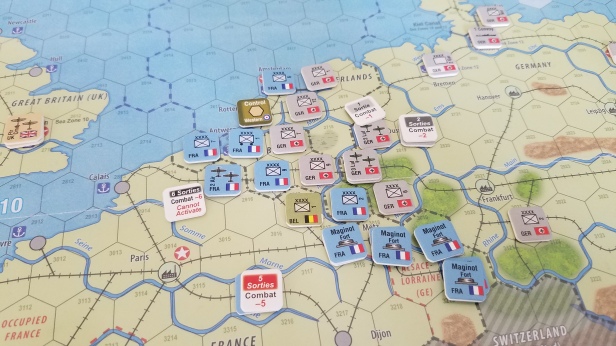 The beleaguered French Air Force were maxed out on sorties due to Luftwaffe Air Strikes, and as such the Germans had full air support in the battle for Brussels whilst the French forces were left defenseless. The Germans gain an inherent +2 and then had another +2 from their air support. They suffered a -1 attacking into an enemy city, for a total modified 9. The French rolled a 3 with a single +1 modifier for their combat strength, forcing the French to retreat.

As a result of the French retreat the Belgium became conquered. The Belgian national will was at 3, and dropped 4 points (to a min of 0) by losing their capital. The Belgian field army was removed from the board, surrendered, and the German National Will increased by 1. On top of that the Axis were able to remove the Pro-Western Marker from Madrid, as the Spaniards (amid their own internal turmoil) rethink their allegiance on seeing the might of the German War Machine.

In Southern France the Italians took advantage of the great weather to try and put pressure on the Allied forces in and around the French Alps. The Italian 11th Army had to pull out all the stops in their first offensive. They used their tank support and air support in order to push the French back into Marseilles.

The Italians followed up their initial attack and had the French on the back foot. The Italians took Marseilles as the French were unable to keep their defensive posture whilst retreating, and where pushed to the banks of the Rhone. French National will dropped by two after losing Marseilles and the French 1st Fleet had to evacuate and ended up basing at Corsica.

The Italian 8th Army pulled out of the Alps and tried to engage the BEF but were unable to make any ground as the fighting in the hills and mountains provided no results.

During the Allied combat phase there was little movement in northern France. The 1st and 9th French tried to counter attack Brussels but were unsuccessful. In the South, however, their efforts were much more fruitful. Seeing the fall of their first mainland city, the French Alps army were stirred to action. They fought valiantly against the Italians reducing them and leaving them much weakened. On their second attempt the French crushed the Italians, causing them to be destroyed.

This was actually very interesting, because the way that the BEF was positioned, and the advance of the Italian 8th Army meant that the Italians in Marseilles had no legal retreat hex, and as such had to take reductions. The French were the hammer and the Mediterranean was the anvil. The Italians were kind of counting on the 8th army being able to dislodge the BEF in order to keep their options open, but that wasn’t to be the case. With the 11th Army out of action the Italians actually have worked themselves into a pretty unenviable position. Much of their potency on the ground has been lost, and they may well be staring down the barrel of some kind of counter attack into northern Italy by the Allied forces.

In The Desert the British took their first steps towards delivering a terrible blow to the Italians. The Italian 10th Army was stationed in hex 5439 and the WDF was positioned on the other side of the mountain range in 5440. The British had seen how ineffectual the Italians had been trying to attack across that mountain range so they decided to circle round to flank the Italians. Their plan worked perfectly. The British drove across the desert and fought the 19th army out of hex 5439 and 5438 back them up to the coastal road west of Tobruk.

The British will have to take pause and consider trying to break Tobruk, because if they advance any further west without taking it they’ll find themselves out of supply.

With all the success the Allies had against the Italians in May, disaster struck on the political front. The Germans pulled a No Event chit, but the Western Allies pulled their first Political Failure. I had to reread those rules because It was my first one of the game (nearly 9 months in) but the crux of it was that the Spaniards have become pro-axis. What a dramatic turn of event, and I love it. For as much a bruising as the Italians took, the Western allies now have a terrible threat lurking in the South West. If the Spaniards take up arms things will start to look terrible for the French. 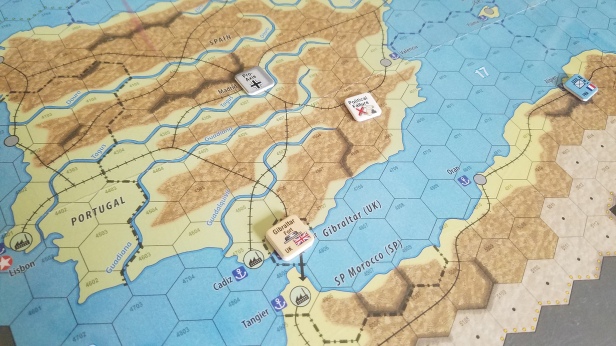 In game terms I think that the Germans bit off way too much than they could chew in trying to strike west so early. But once again Unconditional Surrender! confirms why it’s one of my favourite wargames with such an interesting curve ball. The dynamic has totally changed and The allies will have to scramble to try and keep the Spanish from joining the Axis.

On the Eastern front Estonia ceded to the USSR, as their glorious Soviet influence creeps ever further towards central Europe. Will Hitler act soon before USSR gains too much ground, or will he wait to try and collapse Western Europe before turning East? I have no idea. But I’m excited to find out.

5 thoughts on “After Action Report for Unconditional Surrender! by GMT Games – May 1940”