You know, it’s really hard to find good games that don’t already have expansions.  Most of the games that are decent games have expansions already and for good reason.  If they sold well the first time, the people want more!  But, I did manage to find a few games that don’t have expansions that I feel really need them.  Most of the time when you think a game needs expansions it is just in the form of more of what the game already has, this is no exception.  Since I am not the designer of these games, I wouldn’t even know what other mechanisms I would even want to add.  For the most part, I just want more stuff to make it more replayable.  Which games NEED expansions?…..here are the Best 3 Games…

Lost Legends is one of my son’s top ten games.  Mainly because he beats me every time we play.  That being said, Lost Legends is such a unique and cool dungeon crawl style game that it just begs for extra stuff.  Okay, I kinda cheated on this one because there are a couple extra add-ons that you can get for it BUT, that’s not enough.  This games needs a serious BIG BOX expansion. One with double the characters, monsters….maybe some locations that give players or monsters extra abilities.  Mike Elliott is a talented designer and I am sure he can come up with something that would make this game even better than what it is now.  This is a game that I am sure suffered from not being bought enough to warrent an expansion…..but man I would love to see it!

Elysium is a very good game, in my opinion.  It is quick-ish. Lots of really good decisions to be made and the mechanism of gaining cards is really unlike any other games.  It just needs more family decks.  There are 8 different families in the game and each game you choose 5 of those to use to build the Agora. That may sound like it is plenty, but it really isn’t.  I just want more choices!  I am sure designers Matthew Dunstan and Brett J. Gilbert can come up with some new and interesting actions for additional families.  How bout a family that adds an additional board to go out on quests???  That would be really fun!  I really enjoy Elysium but the differences in games is not as wide as I thought it would be when first playing the game. 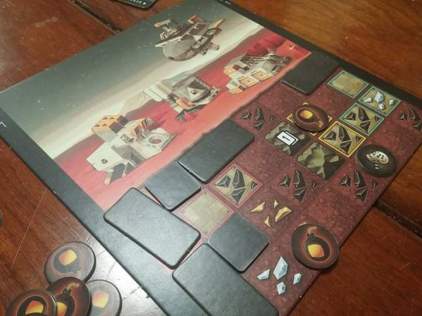 A fantastic deck building game from designers Gavan Brown and Matt Tolman that I feel needs more stuff.  I really enjoy this one…….but please make more stuff for it!!!  Throughout the game you are adding depth boards to Mars that allows you to dig deeper and uncover better minerals, gems, gold and other special items.  The game only comes with ONE board for each level.  They are double sided yes, but still….not enough.  I would love to see some more depth boards with unique challenges…..maybe some with air pockets that can’t be drilled….or some that have aliens that come and steal some of your rubies….I don’t know just something!  I would also like to see some extra worker cards that are communal!  One of the great things about Super Motherload is that each player has their own deck to buy cards from.  I would love to see other more powerful cards that anyone can buy from that have no point value.  That would add another choice to go for more powerful cards or buy your own and get points.