Theme is a pretty big deal for me.

Now that doesn’t necessarily mean that I love chucking dice to kill monsters more than a good dry, tactical Euro. Sit me down and I’m just as happy to play Terra Mystica or Dominant Species, as I am to play The Others: 7 Sins or Smash Up!.

What it does mean is that I’m in heaven when I find that rare masterpiece where a game’s theme and gameplay blend together perfectly. Ninjato is that kind of game.

Ninjato is a game for 3-4 players (Oh does the box say 2? They lie!) that plays in about 60 minutes. It’s classified primarily as a worker placement, but includes elements of set collection, hand management and push your luck. All of this and yet somehow it manages blend all of these together wonderfully.

Ninjato is played over the course of 7 rounds and at its conclusion, the player with the most honor (VP) wins. During each round players place their worker shuriken on the game board to take a variety of actions including: attacking faction houses (to steal treasure), training under the sensei to gain powerful skills, refilling hand cards or making purchases with their stolen treasure.

Raiding houses makes up the bulk of Ninjato and accordingly, it’s the most thematic and exciting aspect of the game. During their turn, a player can place one of their worker shuriken on a building and declare their attempt to raid it.

Each house is guarded by a sentry with a numerical value printed on it. In order to defeat the sentry and steal a piece of treasure, the player needs to beat the sentry’s value by playing a card from their hand.

Defeating the sentry lets the player move a treasure from the house onto their shuriken. But if the house contains more treasure (which it will in most cases) players can choose face additional entries taking a treasure for each single sentry they defeat. The player can continue to face sentries and steal treasure until all of a house’s treasure is gone, the player decides to stop or if they come up against a guard they cannot defeat. Beware though! If a red sentry card is flipped, an elite guard is on the way! Elite guards increase the number of treasure on a house, but are far more difficult to get past!

Honor is scored most often by turning in stolen treasures to bribe envoys or spread rumors. When spent, each piece of treasure scores honor based on the value printed on its face.

Players can also visit the sensei where a variety of variable player powers and upgrades can be purchased. The upgrades can do a number of things, such as modify the values of played cards, give special actions or increase influence with a faction.

Once all players have placed their worker shuriken, the round ends. If it’s a scoring round points for each faction on the board are tallied and awarded to the player with the most envoys in that color. Then empty houses are restocked and the next round begins.

If there was any way to mesh a euro-style worker placement game, with American “push your luck” mechanics and make it work… Well Ninjato’s found a way to do it. The brilliance of the game comes from the way it not only blends all of its ideas together, but in the way it does so while capturing the theme. It’s got the pulse pounding action of not knowing what’s on the other side of the next sentry card, while simultaneously keeping a decently weighty, strategic feel to it.

The purchasable skills provide a fantastic option for mitigating your luck, which cuts down on the frustration that can come from losing your momentum on a bad sentry card draw.

And the way Ninjato’s focus fluctuates between players counts really adds to its appeal. Your approach and strategy will need to be redefined considerably when shifting from a 3 player to 4 players game, which isn’t something I’ve noticed to be as prevalent in other worker placement game like Lords of Waterdeep or Caverna.

I (not so subtly) alluded at the start that Ninjato doesn’t play well with 2 players. Where the envoy and rumor cards play a big role in scoring points for 3-4 players, they can be almost ignored in a 2 player game in favor of simply stealing treasure and spending it for points.

Another minor nitpick is the limited number of actions you can take. Each player only receives 3 worker shuriken and with 7 rounds, players are extremely limited on the number of actions they can take. That’s not necessarily a bad thing except when you consider that a bit of bad luck when flipping a new sentry can make even the best laid plan go sour. Every placement needs to be calculated as even one mistake will cost you quite a bit. Altogether, I think giving each player 4 worker shuriken would have been a much better idea.

Everything about the components in Ninjato just screams quality. (I mean just look at it!) Wooden pieces, exquisite artwork, and good, solid components make the game itself feel like a piece of art. 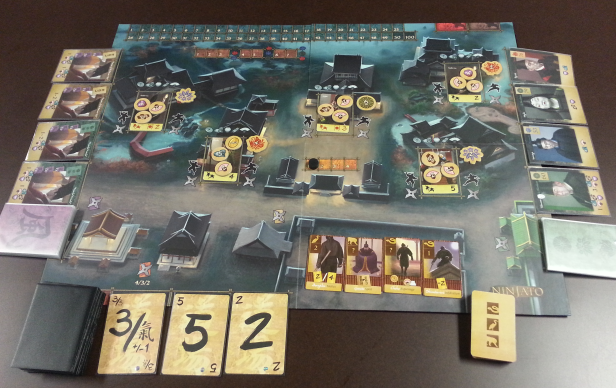 The change in flow between 3-4 players really adds to the game’s replayability. Especially in a four player game where you have to choose carefully between focusing on envoys or rumors (and which ones specifically) means you’ll rarely follow the same strategy.

Almost every mechanic of the game hits the perfect thematic flair the game shoots for, but it just seems so strange that you’re severely limited on the number of actions you can take.  At least once per game, you’re bound to get hit by a guard you can’t beat and losing that worker for the turn will slow you down considerably. That said, the skills are a fantastic means for mitigating your luck, and after a couple of turns you can generally outfit yourself well enough to handle most things the game throws at you.

The push your luck aspects of the game are the only reason Ninjato doesn’t score a full 5. While this appeals to me, I can see strategy purists having issues with it. That aspect of the game aside though, there is almost no hidden information (aside from cards in your hand) so everybody’s plans are relatively telegraphed—which leads to some fantastic opportunities for strategic planning.

Ninjato is easily in my top 5 at the moment. Its excellent blending of theme, mechanics and strategy are exactly what I’m looking for in this type of game. There are certainly other games out there that do things like “worker placement” or “set collection” better, but you would be hard pressed to find one that does everything Ninjato does half as well.

One thought on “Review: Ninjato by Z-Man Games”