Last week I did an entry on games that support more than two players but I liked how they play with just 2 players.  Today I am focusing on just 2 player only games.  I haven’t played a lot of these types of games but the ones I have played are quite good.  Making a great 2 player only game can be quite difficult.  To me when it comes to these games, they usually have a hard time keeping my attention and the depth of strategy is missing.  There is usually plenty of interaction.  I grew up playing many different Collectible Card two player games like Magic, LoTR, Star Trek, but the randomness and timing aspect really turns me off to those games.  It is really hard for me to find those really good combos and then have them magically work perfectly through out the game, so sadly you will not be seeing many of those games on my list.  Well, let’s find out what are my Best 3 Games with…2 Player ONLY!

I wasn’t sure if I was going to like this game or not but after playing it, I knew it was something special.  The game is smooth to play but really has a depth of strategy that I really like.  Once tiles start being placed it really gets crazy and you have to plan ahead to do well, knowing that your opponent might and probably will mess up your paths to certain islands.  I really enjoy the simplicity of the world of islands and icons are changed due to where you are sitting.  The goals that you need to build temples and where the icons need to be are completely different from your vantage point from your enemies.  You may need to have an icon to the left of a temple but putting it there might help your opponent without you even knowing it. It is a really fun, smart design by Jay Cormier and Sen-Foong Lim.  The race aspect even brings out a more stressful feeling to make sure you don’t waste any turns. 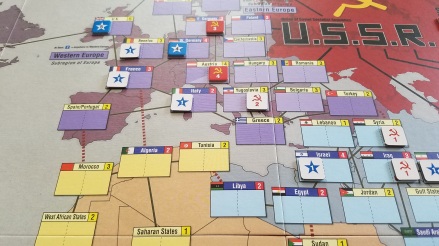 I had to put this on my list…..and this is coming from a guy who doesn’t really like historic games.  They always remind me of history class and how boring it was.  I like learning about history but the pains of remembering years and dates for no apparent reason has scared me for life.  Twilight Struggle is a superb game of intellect and strategy.  I absolutely love the dynamic of this game and how it flows.  There are so many choices to make when playing this game that it feels daunting at first, but after your first play, you get a real sense of how you should be playing….for that game, then you play again, and your opponent does something completely different and its back to the drawing board.  The game is long and that is probably the only reason it is not at the top of my list.  But the way Ananda Gupta and Jason Mathews designed this game around pure strategy and the choices you make is just brilliant.  The only slight randomness is what cards you get when….other than that it is all about your choices.  I was shocked at how much I like this game!

MINIATURES!!!  That’s not the only thing I like about this game but it doesn’t hurt it.  I love the Command and Colors mechanism in Memoir ’44.  I have not played all the other games with the system but I would love to.  I liked Memoir ’44 but I felt it was lacking objectives…it turned out to be just a slug fest with the luck of the dice.  The fantastic thing that I love about Richard Borg and Robert K. Kouba’s design in Battlelore 2.0 is the added objectives and Lore Powers.  that changed it all for me.  I love having certain areas of the map as strongholds that give you victory points at the end of your turn….if you can keep them.  That gives me even more strategy than just killing other armies.  I also love the extra individual objectives on your set up card that gives you another way to score points.  But then trying to keep your opponent from completing their objectives.  THEN you add the Lore and special Lore cards that give even more abilities to do on your turn or react to your opponent’s action is just fantastic.  It doesn’t hurt that my son also loves to play this game.  There is a bit of randomness on the command cards you get and how they might not always let you do exactly what you want, but the Lore Cards many times help in those regards.  I absolutely love this game, I only wish set up would be just a tad bit easier!