I am not sure how this list will turn out or how it will change throughout the year but I want to get a head start on new games coming out this year and maybe this will help me.  I do want to start by saying that there were only about 10 pages of games that are listed at BGG at this time coming out in 2017.  Last year, by the time Essen came around, there were about 23 pages of games.  So, yeah, there will be tons more games to be released this year that have not even been announced yet.  I would also like to say that it would have taken a very long time to go through each game and truly study them to find the ones that would appeal to me the most.  That being said, many of these games I went strictly on theme, looks, previous knowledge or games I have Kickstarted.  Anyway, these are the games that have my interest peaked for 2017…..

There are no pictures for this game and I am not even sure what it is but the mechanisms say Card Drafting and Dice Rolling….okay but the description says….Pioneer Days is a dice-drafting game reminiscent of The Oregon Trail. While you pursue your strategy, you must be prepared for impending disasters such as storms, disease, raids, and famine.  SOLD!  I love Dice Drafting and The Oregon Trail brings back so many fond memories from my childhood. Tasty Minstrel Games is a solid publisher that I have enjoyed in the past.  I have no idea what may come of this game but I am interested!

9.  Sails to Steam by Roxley Games

This is my heavy brain burning game that I have added to the list.  BGG has it rated a 4 out of 5 in complexity.  I love games that progress through out the game and this one seems to be just that.  The description states…Starting with a small fleet comprised of a few meager sailboats and a canoe, players will build boats, settle colonies, and even found new countries in an effort to spread the influence of their mighty empire. As their influence and power expands, players must carefully gauge and react to the global economy created by their fellow players and attempt to leverage their advantages to push out other empires if they plan to become the mightiest empire.  The mechanisms seem to be calling me also, Deck/Pool Building, Tile Placement, Worker Placement and I am not sure what the heck Pattern Building is but color me intrigued! Here is to hoping this scratches the Heavy Itch for the upcoming year.

I recently bought and played Simurgh by NSKN Games and immediately loved it, even though I am really bad at it.  So, this choice is solely based on NSKN and my initial great first impressions of Simurgh.  That and I LOVE the theme of this…..In Perfect Storm: Alaska, 2-5 players take the role of small entrepreneurs looking to make their fortune fishing in the Bering Sea. You will start small, with a basic ship and a rookie crew led by a captain with big dreams but little experience. At first, your crew will venture into shallow waters after the easiest prey, the fish. With the money you earn, you will afford a better crew, maybe even a bigger boat and you’ll be able to catch shrimp or even the most valuable King Crab – but you must hurry and use your resources wisely, the fishing season is short and the weather changes in no time.  I love the show The Deadliest Catch and I love the theme of crab fishing.  If The Perfect Storm can introduce some new and interesting choices and interaction between players as NSKN’s previous game Simurgh did….I will be one happy Captain!

This is my Family Game entree.  I am always looking for great Family games and this one seems like it will be a hit.  I am also a big fan of Libellud’s other games, Seasons and Lords of Xidit.  There is one thing that sold me on Dice Forge, IN GAME dice customization.  The dice are blank at the beginning of the game but as time goes on, you add different sides to the dice to make yours different from other players.  Such a cool concept!  We have played Lego games that did this very well also and to have it in a modern design would be fantastic!  I am rally looking forward to this game!

This is the first game on my list that I have backed from Kickstarter.  I really like it when games put you in a role that is opposite of the norm.  Like when you play as the Aliens instead of the Humans.  Whelps to Wyrms is exactly that.  In this game you are …. Exploring the new world as a dragon hatchling! Players compete with each other to see who can amass the greatest horde of gold. As they gain experience and grow into larger and more capable dragons they will also face the challenge of slayers. With only 9 rounds to play it will be a tight race to see who can be most infamous Wyrm!  I mean….come on, what is not to like about that?  There is tile laying, variable player powers and Human AI that try to thwart your pillaging!  Through out the game you grow your dragon and make it more powerful.  I am really excited to get this and grow my Wyrm to rule the land. 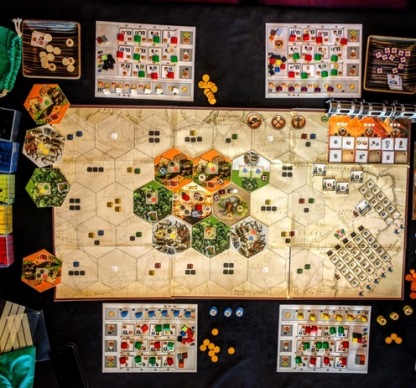 The only thing I needed to see with this game was What’s Your Game? as the publisher.  I have been a huge fan of them lately.  Madeira, Zhanguo and Oddville are already in my collection with Railroad Revolution soon to be added.  This was an automatic, especially after I saw the above picture.  I mean, tile placement with all those bits and pieces….it just looks so good.  Even though What’s Your Game? games are a beast to teach, once you get it down the games are always very good.  BGG says….Brasil is a game about gold-mining in 18th-century Brazil when Bandeirantes (explorers) started to travel through the country and discovered a new region of “black gold” along the way.  The game of Brasil is played with cards. More than a simple game about mining, it requires that players combine actions to develop the region by building essential infrastructures like houses, stores, farms, churches and roads.  Just take my money now!

This game has been in development for quite some time and hopefully it is close and will be released this year.  I can’t imagine the play testing that would need to go into this game.  From what I understand, this is a legacy game that has 3 other legacy games following behind it.  They describe the game as this…..Each game in the Chronicles Series uses Rob Daviau’s Legacy System within the game itself, but will use the new Echo System to allow the world you create in Chronicles 1: Origins to be continued in the second game of the Chronicles Series due out in 2017.  I would be surprised if the second Chronicles comes out in the same year but I love the thought of building upon what has already been done in previous games.  I am somewhat skeptical on how it will work and if I have to play with the same players through out ALL the Chronicle games.  I have a feeling that this will be a legacy type year and after playing Pandemic Legacy Season 1, I can’t wait to see where this goes.

3.  The 7th Continent by Serious Poulp

This came out on Kickstarter at the end of 2015 and I was not able to jump on…..but that doesn’t stop me from really wanting to get this game.  This is my co-op entry to the list.  There are a couple of things that interest me in this game….first is that it is said you can play from 5 to 1,000 minutes.  The game over all is a very long exploration game but it boasts that you can pause the game, put everything in the box and then pull it out and pick up right were you left off.  There is a ton of components in the game that make it seem like each time you play it will create a unique experience.  I will leave it with this….In The 7th Continent, a solo or cooperative “choose-your-own-adventure” exploration board game, you choose a character and begin your adventure on your own or with a team of other explorers. Inspired by the Fighting Fantasy book series, you will discover the extent of this wild new land through a variety of terrain and event cards. In a land fraught with danger and wonders, you have to use every ounce of wit and cunning to survive, crafting tools, weapons and shelter to ensure your survival.

This is my second and last Kickstarter game that I backed for this coming year.  From the publishers that brought us Trickerion, which I hear is great, comes Anachrony.  This game had my attention as soon as I saw it on Kickstarter and the unique workers being minis and you place little tokens in them to signify what kind of worker they are.  So, in essence there are two things you need for your workers….a body like an Engineer or Scientist and an Exosuit.  Without both of these, you can kiss your future goodbye.  Probably WAY over produced but that is just fine by me.  This game also has some time warping mechanisms that seem to be a good implementation.  There are also variable player powers and multiple paths to victory.  I wish I could time travel to the future to get this game already! The good news is, it is ahead of schedule based on their Kickstarter plans.  WOOHOO!

Another Legacy style game…..only this time…..a worker placement mehcanism!!!!  There is not a whole lot of information on this but I love the idea.  A competitive worker placement game with legacy infused progression.  They say that it can be played 12 times with the legacy aspect then after that you have a unique worker placement that can be played on its own that will be different than everyone else.  I can’t imagine all the possibilities there could be with this game……walls dividing buildings, roads to get to off map places, boats, cars, ooohhh man…..I can’t wait for this game!

There were many Honorable Mentions that I must list……The 5th Land by Bright World Games, Shifting Realms by Soaring Rhino , After the Empire by Portland Gamecraft, Sub Terra by Inside the Box Board Games, Unfair by Good Games Publishing, ERA by World Within, Legends Untold by Inspiring Games and Thunderstone Quest by AEG.

Well there you have it!  looks like it will be a good year for gaming and hopefully many more by the time Essen comes around.