By Mini Games, I am not talking about games that fit inside a pack of gum….do people still buy packs of gum?  I am talking about a large game with a Mini Game within the larger game.  I am a big fan of this mechanism.  I think it brings a whole new element and strategy into the game.  This is also hard to accomplish.  It takes a special mind to be able to put something in a game that makes you change focus or strategy to accomplish a smaller task.  I love the struggle I go through when I am going along and doing my stuff but then need to change my train of thought to figure out what I need to do to get a specific thing accomplished.  Many times there is not a specific mechanism that the mini game has, it just works by itself.  Some games feel like they are nothing but mini games and some times the mini game feels so out of place that you often ask “why?”.  Anyway, here are the Best 3 Games with…Mini Games (inside bigger games)! 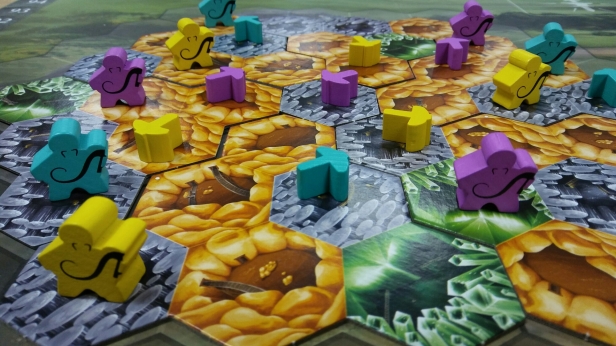 In a normal game mining for resources is just as simple as put your worker here and get this resource.  Isaac Childers said forget that when he designed the mining phase in Forge War.  The mini game in Forge War when it comes to mining is fantastic.  The mine consists of tiles that have hexagonal spaces each a color of a specific resource.  Each player has 3 Overseers in the mine telling workers to get specific resources.  On your turn, you get to move one and only one Overseer.  You move them in any direction as far as you want them to go, but you can’t go over other Overseers.  You drop off a worker from the spot you came from and get that resource.  If you jump over other peoples workers, not Overseers, you get to change those workers into your workers and get resources from those as well.  If you jump over your own worker it gets changed to another player’s worker and they get those resources.  It is an extrememly fun and thinky way to get the resources that you need instead of just puting a worker down and getting something, you actually have to think and work for your resources!!

I wrote about Alvin Viard’s city building game in another Best 3 Games list.  I am adding it to this one also because the mini game in the city building of this game is great.  There are lots of things to do in this game, worker placement, tile placement, etc.  It could really just be a game about city building and do just fine…..BUT the mini game in the growing stage of each round really caught my attention.  During the build phase you can build buildings by adding them to your city…..this won’t get you very far.  In order to really maximize your city, you need to be able to take full advantage of the growth phase.  In the growth phase, your buildings will automatically get bigger if they meet a certain requirement.  Finding the space for them to grow is the difficult thing.  The buildings are of many different shapes that you would see in Tetris.  There are also different buildings that cannot be by each other.  This mini game turns an ordinary tile placement city game into a solid, tough mind game that keeps you thinking outside the box.  When that oddly shaped five piece building fits in the perfect spot you just want to gloat to everyone at the table.

This game by Vital Lacerda is chocked full of mini games.  It seems like every action area has a mini game to it.  The most notable and my favorites are the Parts Department and the Assembly Line.  In Kanban, you are trying to develop different styles of cars with upgrades.  The first area is where you choose designs.  Then you need to go to the Parts Department to order parts for your cars.  You do this by placing a parts card on the corresponding area.  The trick is you have to split the card up into two different sides.  Four parts will go on one side and two on the other.  The only parts that are added are the colors that match on the same side.  It is a nice puzzle that makes you stop and think for a minute.  And wouldn’t you know it…..you never get a card that gets you all the parts you need.  The next mini game is the Assembly Line.  This is where you order cars to be assembled and brought out to the test track.  There are 5 different color cars that you can assemble but make sure you have a part to put on those cars.  You choose which color you want to produce and then you slide it down the assembly line forcing other cars to move out.  This is key to maximizing your points….you want to get cars that you have designs for and then put them in your garage.  I really love all the mini games in Kanban.  The game is actually quicker than you think and every time you play you think about how you can do it better than the last time.