Escape from Colditz, by Osprey Games is their brand new remastering of an old classic. Have no fear, this a remastering they’re very proud of, and is an excellent package. You wont find any added CGI singing monkeys like in Return of the Jedi. I first saw this game on display at Gen Con 2016 and it immediately caught my eye. The box is huge, one of the biggest in my collection, and the box artwork is just so visually appealing. I’ve not played the older version of this game, and hadn’t heard of it, so a game about Colditz was just so exciting! I watched the BBC documentary series about the POWs and escapees as a kid with my family and have actually visited the Castle back in 2008, which was an amazing historical experience. So I’ve been eagerly anticipating the release of this game for a few months now, and playing it did not disappoint!

Major P. R. Reid is a survivor of Colditz Castle and chose to bring his experiences to those back home in the form of a board game. The game first hit shelves in 1973 and it has been lovingly played ever since. Osprey Games remastered the game, improving the quality of the components and offering a more streamlined and polished version of the rules. The great news about the whole thing is that they included all the old classic rules and cards so if you just want a trip down memory lane you’ve got that right here too.

The game also comes with a supplementary historical booklet as well as some extras that we’ll cover in the components section that make this not only a game but a really informative learning experience as well.

Escape from Colditz is a cat and mouse game, where one player takes on the role of the German prison guards and the other players are POWs of different nationalities trying to escape. The game has a fixed amount of turns depending on how new you are to the game, or based on a mutually decided length. The game ends with a German win if the countdown gets to Zero without any one other player making 2 successful escapes.

The Allied players need to spend their time collecting equipment cards by exploiting opportunities and careful planning. Once they’ve put together a complete ‘escape kit’ (including civilian clothes, map, compass and some food) they can attempt to get out of Colditz! But they’ll need more than their wits alone: some useful tools as well as a bit of luck are needed to get out unscathed. POWs will need to build rope, steal wire cutters, forge German documents as well as dodge the guards, in order to see freedom once again. The German player will be trying to track down the conspirators, break up illicit activities and apprehend attempted escapees. Careful placement and a good hand of cards can aid the Germans in keeping a tight lid on things.

Pat Reid is one of the Wanted pictured at the bottom!

Going the extra mile with the packaging 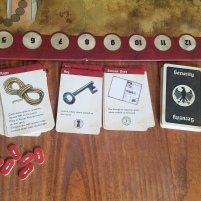 Go ahead and watch the unboxing video if you want to get up close and personal with everything in the box, but rarely have I seen a game whose components evoked the theme to such a degree. What I mean by that is there’s plenty of great games that are thematic and chock full of extras, but Escape from Colditz has so many extras in the box. From the Red Cross Package, to the larger-than-the-rule-book Historical background book Osprey crammed in a feast of history, theme and personality. On top of that, the board has been revamped for this edition, it’s big and clear and also keeps that nostalgic feel with it’s style. If I had one tiny, and it really is tiny, concern it would be the thickness of the card stock. The cards are handled a lot, and they’re just a tiny bit on the thinner side. But really I had to scrape the barrel to find anything negative with the components.

One little note, Osprey changed the artwork on the box to have a German eagle instead of a swastika, so that makes the box a little more tasteful to have on display in the family room. Beautiful presentation!

Remember, this is a remastering of an old classic, so with that in mind – this is a roll and move game. Osprey did a great job in cleaning up the rules, and making them a little less random (relatively speaking) but also included the old rules with extra cards to play the game just like you used to! The card play is very important for both sides, the allies will be making ‘equipment farms’ and gathering escape kits, whilst the German cards allow inspections, or aid in apprehension. The interaction between the different nationalities of POWs can be really interesting as each might be focused on ‘farming’ a different piece of equipment and then using their surplus to trade with the other groups to get the items they are unable to produce. This gives the game a very cooperative feel, but it is still about seeing who can get 2 of their POWs out first to win, so don’t help the other too much.

The cat-and-mouse element in this game is really fun, especially knowing that it’s kind of low stakes because if you roll poorly then you’re in solitary and there’s nothing you could have done differently. We did love the doubles rule for rolling as well as it allowed several major escapes with 3 multiple doubles being rolled giving a 32 movement allowance. Great fun!

This is affected above by the whole roll and move aspect of the game. So, no, this isn’t some heavy hex and chit wargame with a 50 page rulebook and 3 appendices. Having said that, considering that it is a roll and move game, there IS a lot of strategy to consider. The placement of your POWs within the inner courtyard and how and when you create items is key to a successful game. 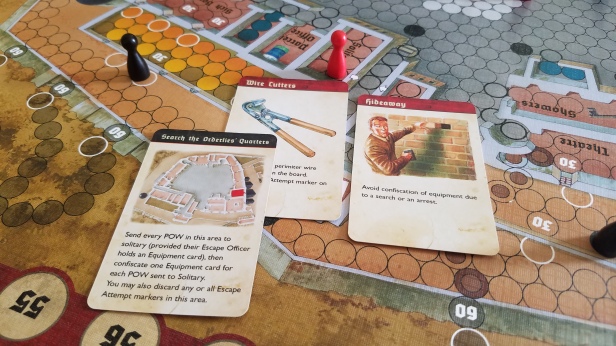 Finding ways to split the guards and distract them from your ‘real’ escape attempts causes you to pause and really consider the best options and routes. We even saw 2 POWs follow the same route, with the first one being a distraction to get captured, requiring the guard to take him back to the prison, therefore freeing up the path for the 2nd POW to make a run for it. For the Germans, there’s strategy on how many guards you have out on the board, and how many you keep back in the guard room to appear on the board at key times and in important locations. I was actually surprised at how much I had to think in this game after reading the movement rules, because if you suddenly roll really high you have a world of options and don’t want to squander them. Conversely if you roll low you start to sweat because the Kommandant will be very angry if there are any escapees.

This is just a straight game. There’s no national powers for each country’s POWs and there’s no scenarios, so there’s less room for ‘new’ plays down the line. Having said that, with more and more players (remember it is designed for 2-6 players) the game becomes more cut-throat amongst the POWs which creates a fantastic level of tension that can help the Germans divide and conquer. Colditz is great fun with lots of players because the level of activity ramps up. With such tight win conditions [2 escapees of your nationality] you’ll want to play again after a losing effort, because everyone is on the cusp of breaking out!

I was very excited to play this game after seeing it at Gen Con 2016, and honestly, I’m enamoured by what the product is. For me this is more than just a board game. This is a window into the life of Pat Reid, and the experiences he had during the latter stages of the war. I didn’t play the original, but having played this I feel like I have. It’s so similar from having read the rules, just a little cleaner and tighter, but the added aesthetic of the new board and artwork  as well as the focus on the nuances (like the Red Cross package) gives you that nostalgic feel. I was also very surprised at how much the roll and move mechanic wasn’t a let down. It actually was pretty fun! Again, it’s not the deepest most complex and overly strategic game, but it’s one I’ll be playing with my boys when they’re old enough!

One thought on “Review: Escape from Colditz by Osprey Games”