In my Top 10 Most Anticipated Games from Essen Spiel 2016 post, Chariot Race, designed by Matt Leacock (Pandemic, Roll Through the Ages: The Bronze Age, Forbidden Island and Forbidden Desert), was #9 and I am interested in the game because it has a quick play time (30-40 minutes), can play up to 6 players and just looks FUN! I reached out to Matt to see if he was interested in doing an interview for the blog and he said yes.

Grant: I read where you have been working on Chariot Race for 6 years. What has taken this long to design the game?

Matt: I started developing Chariot Race shortly after completing Roll Through the Ages: The Bronze Age. A combination of factors lead to its lengthy development time. I was busy with my day job and all the Pandemic products, for one. I also got stuck on the design and put it on the shelf for awhile. A playtester who was a big fan of the game insisted that I finish it a few years ago, so I took it down, dusted it off, and got back to work on it again.

Grant: How much has the game evolved over this time? I understand that you also started out with wooden boards using pegs. Why did you go away from this? Cost? 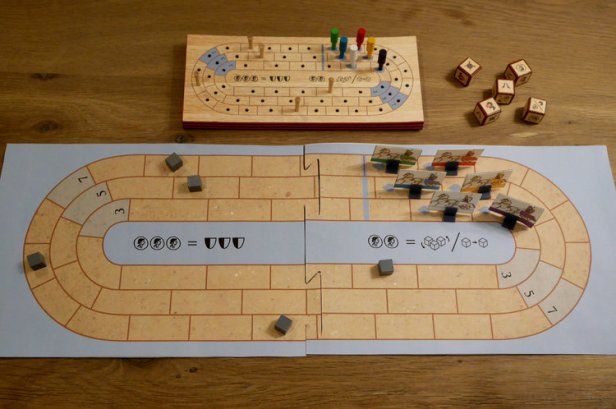 Matt: Both the mechanisms and the physical production evolved over time. The Fortuna (luck) mechanism came later, as did the variable chariot design and the version of the track with obstacles. The variable chariots and double-sided board were an opportunity that opened up when we made the shift from wood to more traditional materials.

I loved the wooden version, but the costs were just way too high for a dice game. The game is designed to be a light affair with a short 30–40-minute play time and we couldn’t see that coming with a $50–$60 price tag. Moving to cardboard cut the cost by more than half and opened up the possibility of variable chariots and a double-sided track.

Grant: Where did you get your inspiration for Chariot Race from?

Matt: The core mechanisms are loosely derived from a racing game that I self-published in 2000 called Lunatix Loop. The most interesting thing about that game was that the leaders of the race were the most vulnerable to the attacks of the people behind them. That negative feedback loop is the core of both games.

Grant: What is Chariot Race about and what are the mechanics used in the game?

Matt: Chariot Race pits 2–6 players against each other in the Roman circus. Players attempt to be the first chariot to complete 2 laps – or to be the last chariot on the track that can still do so. Each turn, players roll 1–5 dice, depending on their current speed. The faster you go, the fewer dice you roll since your chariot is harder to control as it gains speed. The dice you roll let you to adjust your speed, change lanes, gain the favor of Fortuna (luck), and attack your opponents. You’ve got to skillfully manage your position in the race, and your speed, damage, and fortune if you hope to win.

Here are some of the mechanisms used in the game:

– Action selection based on rolling, selecting, and re-rolling dice

– The faster you go, the fewer dice you roll

– Your initial speed each turn cannot exceed the damage you’ve taken. So as you take on more damage, you’ll slow down

– The slower you go, the more dice you roll, which makes it easier to catch up

– You can also repair your chariot using fortune

– All the damage you take from spears, caltrops, the corners, and your opponents’ rams are deterministic and quick to apply

Grant: Tell us about the cool custom dice. What do the symbols mean and how does this affect the game?

Matt: Each of the 5 dice have the following faces:

– Drive: Add or subtract 1 to your speed

– Sprint: Add 2 to your speed but take 1 damage

– Fortune: Add 1 to your fortune track

– Attack: Throw a spear or drop a caltrop on the track

Grant: How do players track their speed, damage and fortune?

Matt: All the attributes of your chariot are tracked on a single, easy-to-handle card with clips.

The Drive and Sprint dice force you to adjust your speed. You then move your chariot 1 space forward for every point of speed.

You take damage from the spears and javelins of your opponents, from entering the corners of the track too quickly, or from ramming (or being rammed) by an opponent’s chariot.

You gain fortune by rolling it on the dice. You can spend 2 fortune to re-roll any number of dice or to set 1 die to any face (except fortune). Or, you can spend 3 fortune at the beginning of your turn to repair exactly 3 points of damage on your chariot.

Grant: How does attacking work in Chariot Race?  I know you throw javelins, but is there a strategy to their proper use?  Is it easier to attack while in front or behind? Also, how do caltrops work?  When I saw this I just laughed out loud thinking about the deviousness of a charioteer dropping metal spikes to hurt the horses.  How much research did you do into the chariot racing of ancient Rome?

Matt: After rolling the dice and making your entire move, you can throw a javelin at an opposing chariot within 2 spaces for each attack result you roll. Since you do this after you move, you can typically only target those players who are in front of you in the race. Alternately, you can drop a caltrop into any of the spaces you moved through (1 caltrop per attack die) after you complete your move. Caltrops do 1 point of a damage to any chariot that moves through them. If you combine the Steer result with the Attack result, you can drop a line of caltrops in front of your opponents, forcing them to drive over them.

I did do a fair amount of research when designing the game. That said, I disregarded a lot of it in the name of playability and fun. While there wasn’t a tradition of using javelins or caltrops during chariot races, I think they’re in the spirt of the gladiatorial combat that happened during the time.

Grant: I love that the game is quick. How have you kept it short and action packed?

Matt: My aim was to create a game that was playable in about 40 minutes. To that end, I gradually simplified the game over its many iterations. The track gradually got shorter and shorter and I dropped the number of re-rolls from 2 to 1. Doing so chopped about 15 minutes from the game, increased the tension, and also made a player’s fortune worth more in the process leading to more agonizing decisions about when to spend it.

Grant: What is the difference in the 2 sides of the double sided track board?  How did you decide to add this element?

Matt: One side of the board adds obstacles to the track. If you run into an obstacle (pictured as a large pile of rubble), your chariot wrecks and is eliminated from play! While this sounds like it can result in an early, untimely end, in practice, players can mitigate it fairly effectively with their re-rolls and by spending fortune. This version increases the tension in the game – you need to decide whether to spend your fortune on tricky maneuvers or to save it as insurance against a nasty roll. The obstacles give players another option to explore and contribute to the replay value.

Grant: What are the differences in the chariots available to players in the base game versus the draft? Can you give us an example of them and maybe provide some close-up shots of the chariot boards?

Matt: The chariots all have 3 basic attributes: speed, damage, and fortune. The 6 chariots that come with the game all give a different mix of those 3 attributes. One attribute is better than average, one is average, and one is weaker than average. The different combinations are as follows:

If you play the 2- and 3-player games, you get to draft 2 chariots and can play them as a team. So you might select a fast one to sprint ahead and a sturdy one to use against your opponents.

Grant: What do you believe is the element that makes Chariot Race so enjoyable?

Matt: What I like most about the game is that it’s such a tight package. Everyone is involved in the race up until the end, it’s fast-paced, dramatic, easy to learn, and plays in only 30-40 minutes. It’s a great opener or closer for an evening. And it also supports up to 6 players so it’s a great pick when you have a larger group.

The most enjoyable element is the drama that plays out over the last few turns. I’ve seen many games where all but one chariot survives to finish the race.

Grant: Are you pleased with the results of the Kickstarter campaign so far?

Matt: Yes, we funded in 3 days and things appear to be going well. Eagle-Gryphon is using the Kickstarter more as a pre-order method (they’re being very upfront about this) so if you’re interested in getting the game right away, you should check it out.

Thanks for the great interview Matt! For more information on the design of Chariot Race, please visit Matt’s blog at the following link: http://www.leacock.com/blog/2016/8/27/the-evolution-of-chariot-race

Also, here is a link to the Kickstarter page for the game: https://www.kickstarter.com/projects/167427101/matt-leacocks-chariot-race-a-perilous-contest-in-a 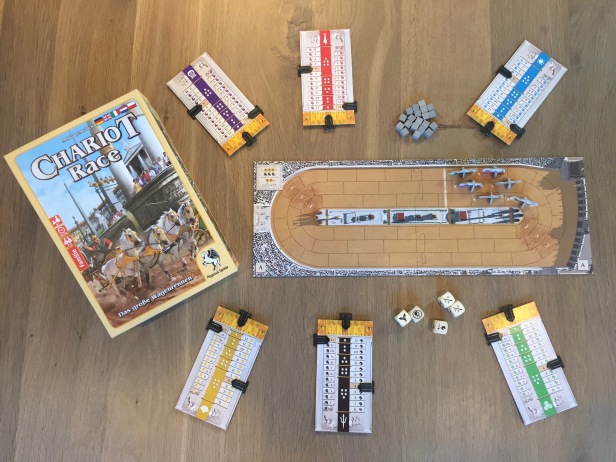