I am usually not a big fan of combat games.  They are extremely confrontational and many times luck based.  Well at least they used to be.  Every time I heard the words combat I immediately would think back to Risk.  Though Risk was fine for the time, I absolutely loathed the luck factor in rolling dice and hoping you roll well.  Which I never could.  Since, my view of combat has completely changed thanks to modern and many times the European influence on the combat mechanism in games.  So what are the games that helped me get more into the combat mechanism, let’s find out in the Best 3 Games with…Combat! 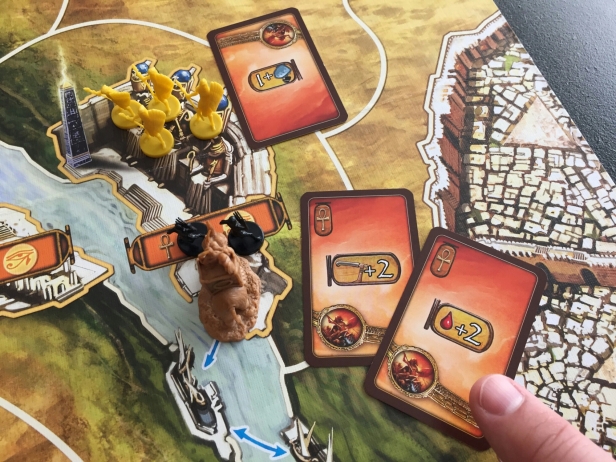 I love the out witting part in Asmodee.  There is no luck what so ever.  Each player has the same deck of cards.  Each card has either attack, defense or kill icons on it.  When you fight others for a specific area, you simply play one of those cards.  Once you play a card you can not use it again until you get it back in your hand.  So, every one knows which cards you have played so far and which ones you haven’t.  Making the decisions to either attack that person later in the game or not to attack them.  The only way to get your cards back is to use them all.  If I remember right, each person has 6 war cards.  I also like that not only do you need to go out and fight for area but you also want to defend your own pyramids.  The game really focuses on attacking though you don’t want to sit and defend much.  All in all, I really like the decision making in the combat aspect of Kemet.

2.  Blood Rage by Cool Mini or Not

Blood Rage completely changes the way I think about combat.  The first thing I love about the combat is that there is no place to hide.  It is so easy to get to one area or another.  The middle region is most valuable and all the other regions are connected so it is so simple to have a massive battle there at any time.  The second part I love about it is that dying is okay.  I no longer need to hang all my hopes and dreams on winning the fight.  That does take away the tenseness of games that both sides are trying to win, but it eases me to know that if I don’t win it isn’t the end of the game.  The last part of the combat I love is the cards.  Just the decision at the beginning of each round to draft the right card is fantastic.  And depending on your strategy you might not want attack cards, but you might need to win fights the next round so keeping one might help you later.  The fighting is so simple…..each person in the war plays one card….add all the attack points together, highest value wins.  The winner has to discard the card they used and the losers get to keep theirs.  I really love the way Eric Lang implements combat in Blood Rage.

This is kind of a weird entry in the fact that I have never played a full game of Cry Havoc.  The combat is that good!   I was able to play a demo round at GenCon 2016 and it was taught to us by the developer Grant Rodiek.  In Cry Havoc, each person is a specific race, each with their own unique abilities.  Any time there are two or more factions that occupy a region a fight breaks out for that territory.  At that time, a separate combat zone shows up and everyone takes their units off the main board and places them near the combat zone.  This zone has three different areas with objectives.  The first objective just allows you to control the area for resources.  The second objective you capture one of the opponents units.  And the third objective you just kill the enemy.  I absolutely love this combat system.  You might want to just control an area so you can get some resources, but when you capture another unit gives you victory points yet if I kill them off there will be less of them to deal with the next round.  It’s not just place your guys on objectives and that’s that, you also have an opportunity to play combat cards to help move your units around on the combat zone….if you didn’t use those cards earlier in the round for something else.  I absolutely love the combat in Cry Havoc!!