Last week, we planned a game day with my brother in law Gary who is in from Arizona for a visit. We all took off work and played various games including a fantastically simple but strategic Civil War themed game called American Heritage Battle-Cry that my father in law has owned since 1961!  The game had been in his basement for the last 20 years and had definitely seen better days.

The American Heritage Series of Games

In case you didn’t know the American Heritage series was Milton Bradley’s series of “war” themed games released in the early to mid-sixties. The sixties editions came in oversized boxes and featured large mapboards and plastic miniatures.

The American Heritage games carry a strong nostalgia factor with gamers from that time, probably because they were enjoyed by both non-gamers and “lifelong gamers to be” and were some of the first games they would have enjoyed and that which set the course of their personal tastes in the hobby for many years to come. I remember games that I played to this day that introduced me to various types of games (see below Gamemaster series). In looking various posts on Board Game Geek, it appears that the Command Decision series of games is generally described as “war themed” even though the series are not truly “wargames” in the traditional sense of the term. The games in the series combined the setting and focus of the historical events portrayed while using family-strategy level rules that were simple but without much depth or complexity.  I am not opposed to games like this and simply understand that not all games can be as deep as say Twilight Struggle. Milton Bradley kept the sprirt of the Command Decision series alive with its Gamemaster series during the eighties including such titles as Broadsides & Boarding Parties, Shogun, Axis & Allies, Conquest of the Empire and Fortress America. 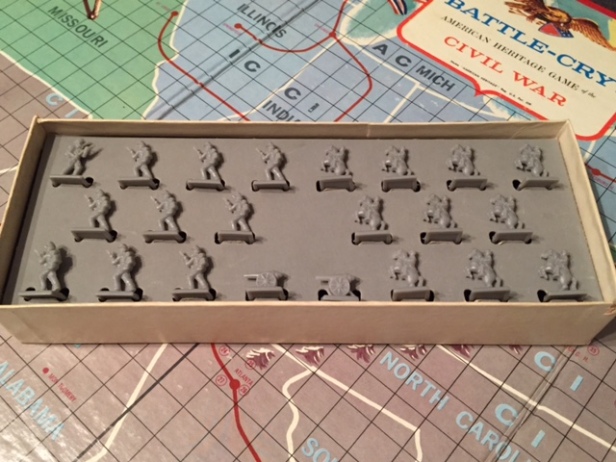 Summary of Game Play and Components

In Battle-Cry each side has a total of 22 pieces including 10 infantry, 10 cavalry and 2 artillery. The starting positions of the units are fixed on the map being marked with I (Infantry), C (Cavalry) and A (Artillery). The grids on the board are square, with no diagonal movement allowed. On your turn, you simply roll two 6 sided dice to determine your movement allotment for the turn, resulting in between 2 and 12 movement points to allocate. Infantry moves 1 square per pip while cavalry and artillery moves 2 squares per pip (a one-square move still consumes 1 pip). Mountains force pieces to pause (they must stop until the next turn) and can be used to control enemy movement somewhat to allow for fast reinforcement or tactical retreat.

Railroads crisscross the map connecting major cities via stations. A piece can use one movement action to move between these linked stations and cover distances that normally would take several turns.  The rails can also be disrupted and the link broken by parking a single unit on the rail line. This is a strategic way to slow movement for reinforcements and control the different areas of the board.

Combat is very simple and is handled by lining pieces up (horizontally or vertically) to face (or flank) an enemy column. You must have battle strength superiority to resolve the battle, meaning the sum total of your units must be greater than your opponents, and this is calculated after movement is concluded. Infantry and artillery have combat strengths of 2, while cavalry units only have a combat strength of 1. The rear piece in a formation then jumps to the other end of the combined columns, and the entire enemy army is removed. To be used, cavalry must have a piece at the front of the column; artillery, if at the rear of your column, eliminates the enemy army without jumping. Artillery cannot attack by itself but must be a part of a column. Double jumps can happen, if the jumping infantry piece ends up facing a lone cavalry. An open square must exist to jump to, so some map deployments are “safe” but not against artillery. However, pieces trapped so that they cannot move are also removed as if they had lost a battle, so this strategy can backfire.

You win by completely eliminating the enemy army but a player may concede earlier when a loss becomes unavoidable. The four player game option splits command of each army in two, and is played in partnerships.

A really good and fun game, combining a historical theme with rather abstract but simple and strategic mechanics. But for what it is intended to be, a light but strategic “war themed” game, Battle-Cry is a success!  We thoroughly enjoyed our game and found that while the game is simple on the surface, there is definitely some hidden strategy and tactical acumen needed to be successful.  I was victorious over my father in law mainly because I was more judicious in the use of my movement points and was always calculating in my head how many moves it would take me to attack and eliminate his forces, while also being aware of his ability to move and attack as well.  This led to me lining up pieces strategically to protect higher value pieces such as artillery (see picture above where I used a Cavalry unit to stack to the right of my artillery to protect it from being eliminated) and often trading my Cavalry units for his Infantry.  In the end, the game has no real resemblance to chess, but the feeling is the same where you are trying to maneuver your pieces to entrap his so that they can be eliminated. 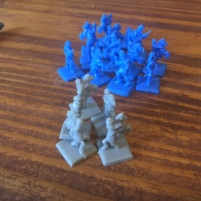 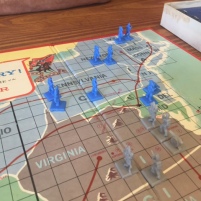 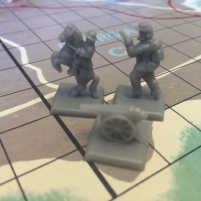 Quality pieces although each side’s pieces are only different in color.

Light but with some strategic depth.

No specific differences in the 2 side’s pieces.

Not a true “war” game but abstracted.