Champions of Midgard is a medium weight worker placement game designed by Ole Stieness and published by Grey Fox Games.  In this game, each player represents a Viking tribe who has come to a harbor village in need of help.  Through out the game you will try to protect this village from attacking trolls, enemy Viking tribes and far off monsters.  The player who protects the village the best, by gaining the most points, will be the winner.

At the beginning of the game, each player will choose a Viking leader that gives them a special ability.  There are five to choose from.  You will also shuffle each deck of enemy cards and put them in the appropriate spot.  Shuffle the journey cards, rune cards (gives you special one time abilities throughout the game), destiny cards (gives you bonus points at the end of the game for fulfilling a goal) and merchant ship cards and put them in the appropriate spots.  Depending on how many players, randomly put military and economic tiles in the market stall area.  You are now ready to begin!

This is your typical worker placement game.  There are areas of the board where you place your workers to accomplish certain things in order to fight enemies.  That is the ultimate goal, to fight enemies.  If you are not doing that on a consistent basis things will not work out very well for you in the end.  Once you place a worker, no one else can go to that spot, except for the hunting grounds.  This makes being first player extremely important.  This is one of those few games where the first player spot will be taken pretty much every round by someone. 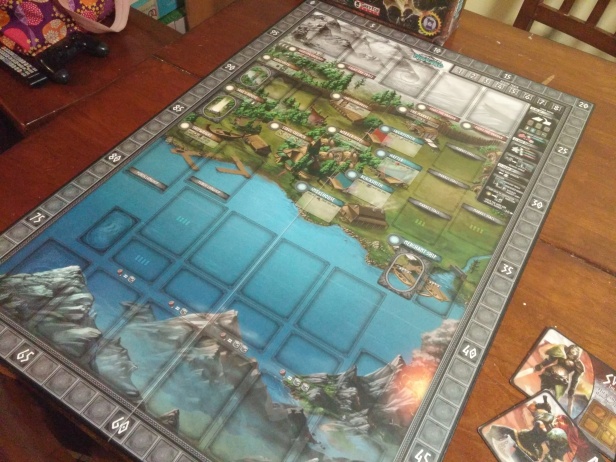 Most of the actions are your typical actions…..gain wood or food, gain warriors, trade goods with other goods, etc.  Wood is used for gaining new boats and rune cards.  Food is used to travel on boats to fight monsters.

There are a few things that separate Champions of Midgard from other worker placement games I have played.  First is the warriors and how you fight enemies.  Your warriors are represented by different types of 6-sided dice.  Swordsmen (white), spearmen (red) and axemen (black) are the three different types of warriors you can train.  They all have unique traits.  Swordsmen are your all-around good fighters with a mix of attack (sword) and defense (shield).  Spearmen are a bit better with fighting but a little less good at defending.  While axemen have no defense and are just all out attack.  I love this part of the game.  Some enemies that you fight are immune to spearman or axemen so deciding what warriors to choose against which enemy is a real nice touch.  You also might be fighting different enemies in a round and then have to decide which warriors are going to be better against which enemy. 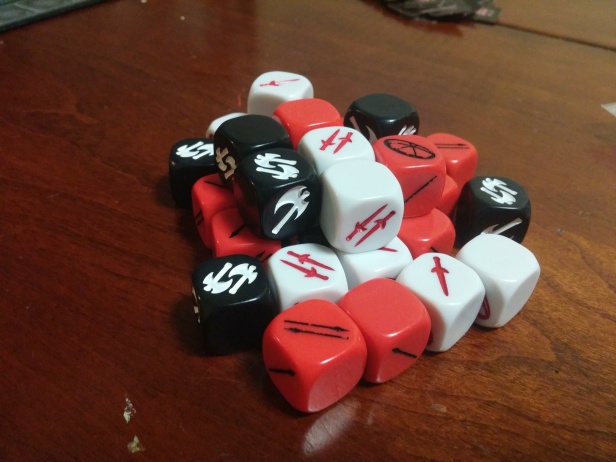 The next thing that sets Champions of Midgard apart from other worker placement games is the enemies you need to fight off.  There are trolls, Draugr (literally “again-walker” is an undead creature from Norse mythology) and monsters.  Each one of these enemies has a benefit and disadvantage to them.  The troll is nasty!!  Each round a new troll will be attacking the village.  Only one player can fight the troll.  If that player succeeds he gains the favor of the village and all the other players receive a blame token.  Depending on how many blame tokens you have at the end of the game, you will lose points.  That is another reason why first player is so important.  The troll spot is one of the first placea taken each round.  The troll also gives you some victory points and wood, but gives you no potential victory points at the end of the game.  The Draugr is the next enemy and they are nasty.  They are a bit stronger than the trolls and the payoff is in coins.  Coins are very hard to get in this game and defeating Draugr is the best way to get money, but they pack a punch and are not easily defeated.  The monsters are the last enemy to fight, but they are in far away lands located across an icy sea.  The only way to get to them are on longboats.  While you are out on the open seas…..bad things can happen.  Each monster will have a journey card associated with it and you could lose food or warriors along the way, so prepare accordingly.  If you are able to get to these monsters the pay off is fantastic.  They are worth the most victory points and can get you back in the game in no time.  The other unique part of fighting Draugr and Monsters is that each one has a colored background of either red, blue or yellow.  For each set of the three colors you collect throughout the game, you will get an extra 5 points at the end.  This adds another depth of strategy to the game.

The components of Champions of Midgard are just above average for me.  The artwork is great and the meeples and tokens do their job fine.  One of my yellow workers is missing an arm (maybe he was injured in an epic battle?!?).  The cards are fine and sturdy.  The rule book is one of the worst I have read in a long time as it is unclear.  Some things are named different things through out explanations and not everything is explained well.

The mechanics are the saving grace.  Like I have said, it is your typical worker placement game but the things that it changes are solid and makes it feel unique.  The warrior dice is by far the bast part of the game.  Getting the warriors that you need and then choosing which ones to use are great.  I love chucking the dice and seeing what happens.  Travelling on boats to fight monsters and stressing out about possibly losing needed items on the open sea is a really nice tension that every one pays attention to.

There is a nice level of strategy in this game, though it can be hard to narrow it down to one.  The Viking that you get at the very beginning will guide you on your strategy, but getting destiny cards that work with that viking can be difficult.  Deciding which enemy to go after each round is a nice twist.  Everyone will end up with negative points due to blame tokens, but how you will negate those negative points is the key.  Will you go after color sets of Draugr and Monsters or focus on destiny cards that give you points at game’s end for fulfilling goals?

This is where I think they missed the mark.  The only thing that changes from each game is your starting Viking and the military/economy tiles.  Some of the economy tiles are worthless and never get chosen through out the game.  I would have loved to see more of these with better actions on them.  The merchant ship cards change each round but there are only 8, one for each round, so you see every one each game.  The amount of enemies in the game is great, I only wish there was more of everything else.

Over all I really enjoy Champions of Midgard.  I have played it multiple times at all player counts and have had a fun time.  It is much more restrictive as a 4 player game than a 2 player game but you still have those moments when you want to scream because someone took your spot.  This is one of those few games where first player has a distinct advantage over the others.  It’s easy enough to introduce new gamers also while giving it a different spin on worker placement games.  I would not use this as a gateway game, but it is a solid next level game.  I love the warrior dice and using them to fight.  I will keep Champions of Midgard for a while and hope to introduce it to my kids as they get older.  If you love worker placement games then this is a solid game to have.  It moves along quick when everyone knows what they are doing and there is little downtime.

5 thoughts on “Review: Champions of Midgard”