Jump to the Pros and Cons at the end here!

Some of my favourite WWII films are ones that cover aerial combat such as 633 Squadron, Memphis Belle, Dambusters, and of course The Battle of Britain. So I’ve long had a hankering to find a game that replicated air combat on a scale broader than dog fighting. I had looked at RAF by Decision Games before, as well as a few others by other companies but hadn’t taken the plunge. At Origins Grant picked up a copy of D-Day at Tarawa by Decision games, I was proud of him for taking the plunge in to official solitaire war games. It inspired me to look a little harder through the Decision Games website and low and behold there was RAF, a 2 player Battle of Britain game that also had a solo variant for either side, two days later it was on my door step and here’s how things went: 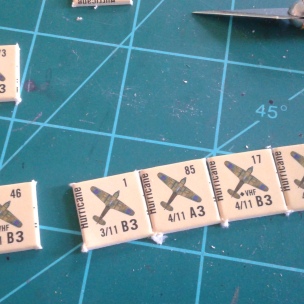 I spent two evenings cutting out the counters which required some extra work and care than other games I own. I had to use an X-acto knife to cut the counters apart at the corners, which would otherwise have torn apart because the die cut at the manufacturers was shallow. Also some of the counters are not centered well [see top left above] cutting off the lettering and the Reserves ‘R’ designation – but after clipping them they look great, I used a sharpie to write an R on the counters where it wasn’t visible. Outside of that the components are great, the cards are well made with a lot of detail on them, here’s Southampton below, I had to discard this one during the German Raid planning phase because of the target priority and strategic value that combined to make it an ineligible target.

The maps are excellent in the production value, they’re clear, with good space and there’s a ton of information on them in charts and lists and sequences of play, which make the game very easy to learn. So how did it play out?

I played the Germans and Grant played as the British in the 2 player Eagle vs Lion variant, that ended up being a really interesting learning experience and blast to play. I got to plan out the days’ raid operations before Grant arrived, which helpd to speed up play time because the planning is effectively a solo aspect of the game. Indeed, the rules say the British player should, during this time, brew a cup of tea!

The scenario calls for a setup of target priorities, and you draw 10 target cards of which you can use any eligible cards to plan raids for the day. The aforementioned target priorities made it so that five of the cads I drew were ineligible for raids that day [cities and industry were low target priority and there was no cross matching strategic value]. I chose when to do these raids, setting up a raid on a radar station first hoping to damage the station and make my other raids a little easier, from a detection standpoint. I assigned my bombers for the day from the 2 available, and respective, Air fleets and was excited to see how it would all play out. The Germans secretly assign the Gruppen from the current raid to a miniature version of the Raid display in secret, and depending on the calculated intelligence level are revealed before or after British squadrons are committed to responding to the raid. This is where some of the strategy comes in; I attempted to destroy a radar station first, so that the subsequent raids for that day might be at a lower intelligence level, thus allowing me greater secrecy and surprise when initiating planned raids. The British player might have to commit squadrons knowing only that there was a ‘major’ or ‘minor’ raid – a major raid meaning anywhere from 4-16 Gruppen! He wouldn’t know the composition of my raid nor the formation [was it a lot of fighters in the close escort and hunt boxes, or was it 16 undefended bomber Gruppen?]. I loved the idea of this aspect of the game, and over the course of the long campaign would become more and more important as over time you could inflict more and more damage on the radar network along the South Coast and really cause a lot of intelligence problems, making your raids much more potent.

The aerial combat was a little confusing at first, but after a close reading of the rules we figured it out, you add all the combat values of all participants and then consult the combat strength table that cross references the number of German Gruppen in combat, you roll a die and consult the results table, this table tells you the effects of combat for each ‘selector’ letter. Each plane has A, B or C on it and the table will say for example ‘all German A planes abort combat, or all British C planes take light losses’. I enjoyed the combat table because its a clever design, the higher the combat value total but the fewer the Gruppen, tells the combat table that the Germans are outnumbered and outgunned, and as a result the die rolling will have worse effects for the Germans.

All in all the game we played was really fun. I was worried at first that the game would feel like two solitaire games combined, but I really didn’t get that impression. They removed the AI and the randomness of the force decks, and gave the German player a lot of control over which targets to bomb, and in which manner. Something that I will say is that this game is built to be played as the full campaign, or at least one of the longer scenarios. The real beauty of the game is evoked over a course of many raid days, and the intervening non raid days where each player can recuperate their forces etc. The game will invariably have extremely one-sided days, but those will balance themselves out over the course of a six week campaign.

Really thematic game – evokes the tension and feel of the Battle of Britain, clawing together enough squadrons to repel the relentless Luftwaffe, loved the secret German planning – gave me a feeling of being a DM all over again! Artwork and counters are all easy to read and functionally good, plenty of tables and charts to consult that are mostly well placed and easy to follow.

To get the most out of this game you need to play the longer scenarios which can be extremely time consuming, but the pay off is worth it. Some counters are not centered well at all, and are not well cut out, so you’ll need to spend time carefully punching this one. As pictured above in the Raid Display there are some charts to consult in the various combat boxes, that are mostly covered with pieces during combat, so it can be a hassle to consult at times.

Look for more on this one in the future as I discuss the differences in each of the solitaire games contained in the box, and conduct some longer campaigns!

2 thoughts on “Wargame Wednesday – RAF: The Battle of Britain 1940, by Decision Games”