The crew then decided to deliver the 2 crates of military grade weapons to Ryloth where their contact was Lt. Katarr. The trip was uneventful, except for the fact that we now have 2 filthy persons on the ship (Krussk and Ulek), and the smells are doubly disgusting.

As we landed on Ryloth in the Kal’uun Spaceport and were in the process of unloading the shipment to deliver, a huge explosion rocked the docks as the Twi’lek Freedom Fighter League led by Byrlane had decided to attack the small Imperial garrison there. They had barricaded and locked down the spaceport and we could see that we weren’t going anywhere. So, seeing an opportunity to make a deal and get a few extra credits, Tekk approached Byrlane and offered the crew for a price. He accepted and Krussk and Tekk assaulted the Stormtroopers using stun grenades (made by Ulek) and some fancy shooting by Tekk to take them out and took hostage an Imperial Governor who the Twi’lek’s planned to ransom for somewhere around 1 million credits (They won’t even get half that amount) and they agreed to give us a portion of the ransom.  They also provided us with 250 credits and a data pad that the Stormtroopers had. We will have to hack it later to see what useful information it has.

Upon delivery of the guns to the rebels located in an innocent looking machine shop in a rundown sector of the city, we were questioned about who we were and how we came by the shipment of guns, as we were not the smuggler listed on the manifest. We explained our story and Lieutenant Katarr was surprised by our claim as Asori Farann had always been dependable and fair with the rebels. He told us to watch ourselves and to be more incognito when delivering shipments to them, as they didn’t want to draw attention. We agreed to do any shipments or other transport jobs for a reduced fee by 25% as we both hated the Empire. With that announcement, he asked if we would be willing to transport a small strike force to the Imperial Prison located on Kessel to free a rebel named Adros Vict that was being held there. We agreed and left immediately for Kessel, even though I was nervous about returning to Kessel as that would bring me very close to my former employers and financiers of my ship the Kerrzek Mining Guild. They had loaned me 130,000 credits nearly 3 years ago to purchase “The Cutter” and I was to pay them back upon each delivery. This worked out well until I ran into some very good money and was “unable” to return to Kessel to deliver payment. I haven’t made a payment on the debt for over a year and still owe them 80,000 credits. Due to this debt and my actions, they have placed a bounty on my head. I have yet to run into any bounty hunters but I have a sneaking feeling that they are on my trail.

Upon arriving in the “atmosphere” of Kessel, we were engaged by four Tie Fighters and thanks to Kruusk’s new found gunnery skill (he actually may have been born to shoot a turbo laser…who knew!) and fancy flying, we were able to dispatch them easily and landed near the prison to begin our infiltration and rescue mission.

We rappelled into the mouth of the mine shaft with the Rebels intel that told them that Adros Vict, a Gotal spy, was being held there. Captain Carren Talon was the leader of the small Rebel strike force, consisting of new rookie (“shinies”) commandos. We descended into the prison using a large lift that was designed to carry large equipment and heavy loads so it moved very slowly. As we descended, we took fire from Storm Troopers who were set as guards at the bottom of the shaft. With some deft shooting from Tekk, who blasted the lifts control box causing an explosion which destroyed the shipping crates and took out 2 of the Stormtroopers, we dispatched the guards and began the assault on the prison cell block where the target was located. 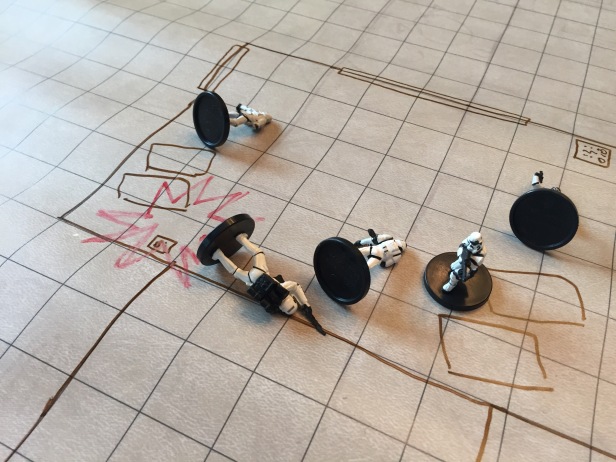 Tekk then threw in a stun grenade in the room and it wiped out at least 10 of the guards who were dug in to repel our assault. Kruusk waded in and mopped up what was left, hacking the Imperial Officer in two as he insulted him. We then hacked into the security system, unlocked the cells and retrieved our target. We also released over 100 prisoners who readily grabbed picks, shovels and any other tools around to assist in breaking out of the prison. As we were preparing to leave, we were attacked by an AT-ST and had to use turbo lasers mounted on the scaffolding of the prison wall to destroy this threat.  That was a close one and we were amazed there was no damage to The Cutter.

We then docked with a Redemption Class Rebel Frigate in orbit around the planet Sullust. The commandos from Talon Squadron really talked us up and said that they wouldn’t have been successful in their mission without us. As conversations were ongoing, Tekk was able to catch a glimpse of a data pad being held by an unsuspecting Rebel officer which seemed to detail plans for a secret project, what appeared to be a Fury Class Imperial Interceptor!  That would be a very valuable piece of information to keep in memory for later. That ship could make a huge difference in the Rebellion’s efforts to infiltrate the Imperials and cause serious havoc. We were then instructed to take our “cargo”, Adros Vict, to the surface of Sullust and its capital city of Byllurun for delivery to Rebel agents for safe keeping. As we approached the planet, we were ambushed by 6 TIE fighters that seemed to know we were coming! In short order, we dispatched them with some deft gunnery by both Kruusk and our gunner droid G7-B3 and then landed on the surface of Byllurun to meet our contact, a very snarky and rude Sullustan named Dealna Dalket. He took Adros from us and paid us the sum of 1,500 credits and dismissed us as though we had the Sovakian bleed!

Until next session, Tekk and Krussk are planning to upgrade their ship by installing an Advanced Targeting Array (the Fabritech ANx 42.A or Snap Shot) as well as make some upgrades to the engines by installing a new High Output Ion Turbine (the R800 Ion Ramjet).