In Action Point 1, we looked at the deck makeup and how you “build” the deck into a well oiled fighting machine. In this Action Point we are going to dive into the various unit types and their actions and special abilities.

In order to provide the abilities, assets and weapons necessary to capture Objectives, a platoon consists of many different types of soldiers who each serve a specific purpose. In Undaunted: Normandy platoons are provided access to these different units in the form of cards. Let’s take a look at these different units and examine their role in the platoon. Let’s first take a look at your leaders who are referred to as Command Cards. These units do not have counters to place on the board but are only represented by a card in your deck. 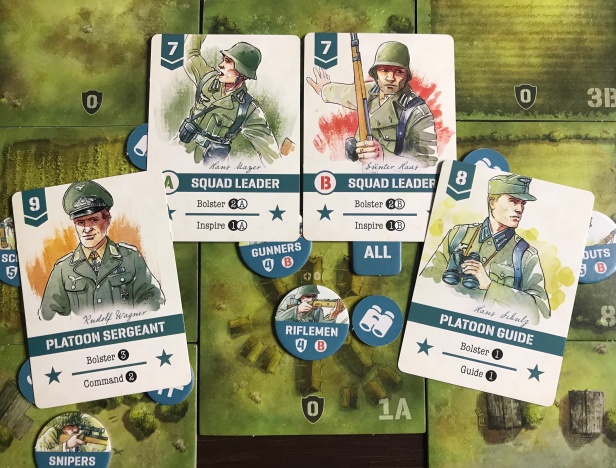 The Platoon Sergeant is the most powerful card in your deck. First, he has the very highest Initiative value in the game at a 9, and while I wouldn’t recommend using him in this way often, if you absolutely need to go first in the round, you can reveal this card to almost guarantee that you will go first.

His real power though lies in his abilities, including Bolster 3 and Command 2.

The Platoon Guide assists the Platoon Sergeant in managing the orders of the platoon and has very versatile abilities to add units to the battlefield or to re-position them. Similar to the Platoon Sergeant he has a very high Initiative value of 8 that can help you go first when needed. But his real strength lies in his ability to Bolster any one card from the supply to your deck and his ability to use his Guide ability.

The Guide ability allows the Platoon Guide to move any unit’s counter located on the battlefield up to 1 tile. The tile that he relocates the counter onto follows the same rules for movement in that the tile must be previously scouted or controlled by your side. This is very useful as you can move a Rifleman into an Objective tile to then use it’s Control ability to win the game or you can move a struggling unit from poor cover terrain into a better cover tile to prevent them from being suppressed or killed so easily. This Guide ability is really flexible and gives you a lot of choices on how to use it. If you don’t need the Guide ability at the time the card is drawn you can always Bolster a new unit of any type or squad affiliation from the supply into your deck.

The backbone of your platoon are the individual Squad Leaders. They are responsible for leading your units on the battlefield by providing control and direction and bringing to bear the needed resources onto Objectives. Being the final Command Card, you will notice that it has a 7 Initiative value but as in the past this should only be used when you absolutely need to go first. The Squad Leader can improve the efficiency and function of your deck by allowing you to Bolster in 2 additional units that match his squad designation, either A, B or C. Inspire is also a very good and useful ability as well as you can pick up cards from your play area that you have already played that turn, return them to your hand to be played again this round. This can help you get additional cards by picking up a Platoon Sergeant to use their Command ability to draw 2 additional cards from your deck hoping to get the unit that you need at that time or to take another shot at your enemy with your Machine Gunner or Rifleman or to Control an Objective with the Rifleman that you just moved onto that tile. Options are always good in these type of card games and the Squad Leader gives you lots of options for sure.

We will now take a look at your Combat Cards as they are units that have to follow the orders given by the leaders and execute them on the battlefield by taking shots at the enemy, providing suppressing fire so you can move into position or take control of Objectives to win the battle and the game.

The heart of your platoon are the Rifleman as they are the units that can not only Attack the enemy but also are the only units with the power to Control Objectives. This does come with a weakness though as typically they are the units that are targeted by the enemy as they know that without Rifleman on the battlefield, there is no way to Control Objectives. 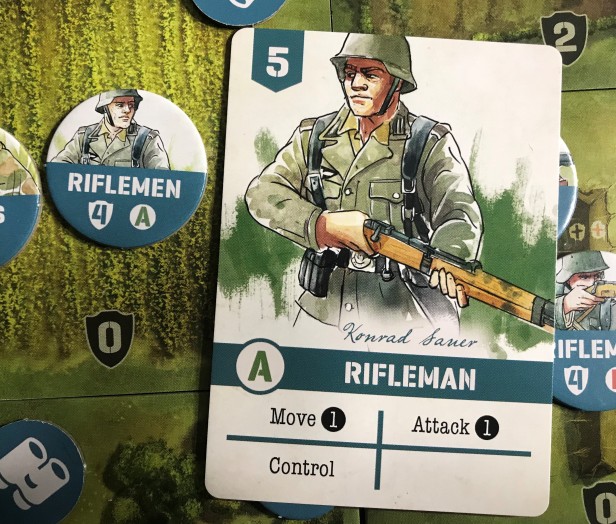 The Rifleman has a decent Initiative value and I have found are used fairly often to bid for the right to go first each round. They are slow on the battlefield and only move 1 tile but they are steady and if properly Bolstered it is common to see a few from either squads A, B or C in your hand each round. Their Attack value of 1 is fairly weak and means that they will only roll one 10-sided die when attacking. As mentioned previously their real strength lies in their ability to Control Objectives. To use this ability, you simply have to have a Rifleman counter on a tile with an Objective and then play a copy of that Rifleman card that matches their squad designation.

The Scout is the unit that paves the way for the rest of the platoon to attack or defend objectives. They are very versatile cards and have a good Initiative value of 6 but also have four other actions/abilities. The Scout can Scout 2, which simply means they can move up to 2 tiles into hostile territory and place a scouted marker on those tiles they move through. This then allows other units to enter these tiles and advance on Objectives or the enemy. Other units cannot normally enter areas that have not yet been scouted. They also have the ability to Attack the enemy with one die. 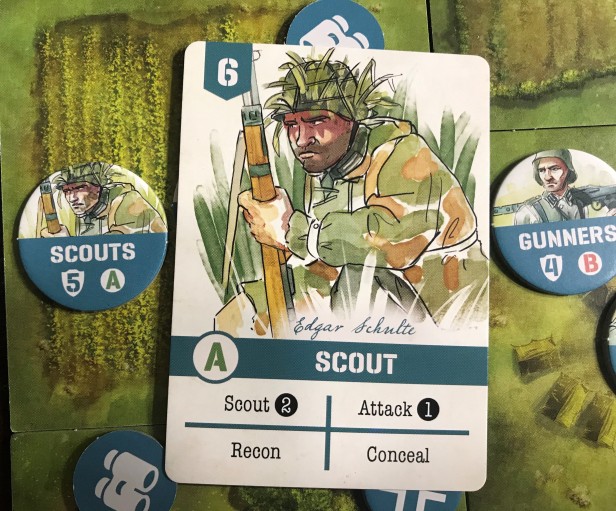 Their real advantage through comes in the form of manipulating your deck or affecting the enemy’s deck. The Scout’s Recon ability allows it to remove a Fog of War Card from your hand and return it to the supply and then draw a new card to replace it. This drawn card can then be used as normal during this round. This is very powerful as it not only slims down your deck, removing the useless space eating FoW Cards, but gives you a new and possibly very important and needed card at that very time. The Conceal ability allows the player to force their opponent to add a Fog of War Card from the opponent’s supply to the opponent’s deck. I love the Scout as he can really begin to mess with your opponent and prepare the way for your forces to be more efficient and deadly in future attacks on the battlefield.

The muscle of the platoon is easily the Machine Gunner. The Machine Gunner is built for Attack as well as laying down suppressing fire to keep your enemy at bay. Their power is in the number of dice that they get to roll. 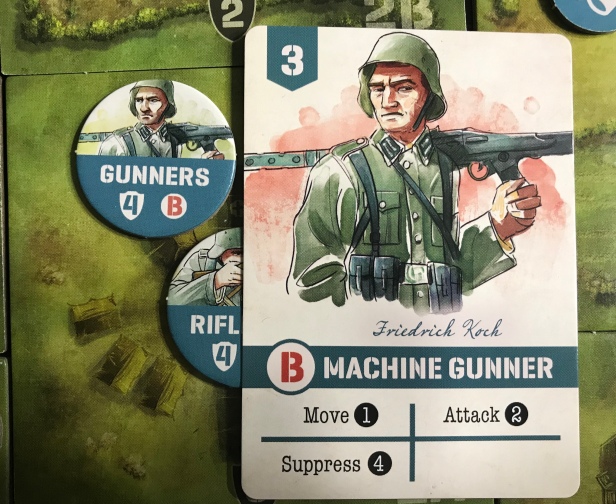 As compared to an Attack from a Rifleman with only one die, the Machine Gunner gets to roll 2d10, which increases his odds of scoring a wound. Their Suppress action is also very powerful as they will roll 4d10 and upon a successful hit the enemy counter will be flipped to its suppressed side and will be unable to take any action until the enemy plays a card matching that unit at which time it will flip back to its ready side. With 4 dice being rolled, I have rarely seen a Suppress action not be successful! This can simply bog down your enemy for multiple turns causing them to waste their cards on flipping their suppressed units rather than advancing on and capturing Objectives.

Snipers are expert with their chosen rifle and can sneak up on and infiltrate the enemy with amazing skill. The Sniper has the highest Attack value (3) and Defense value (6) in the game. When they take a shot, they more often than not will connect with their target and can be a really powerful weapon in this game with the lack of line of site rules.

Their Stalk 1 ability allows them to move onto tiles that have not yet been scouted by your Scout units so they have free reign to move around the board from high defensive terrain to high defensive value terrain all in an attempt to shorten the distance to their target thereby improving their chances of scoring a successful hit. They are also really difficult to hit as their base Defense value is a 6 and when hidden in a grove of trees or buildings, can require a 9 or higher to be rolled to score a hit against them. One other advantage that they bring to the table is they can also be used to infiltrate into an enemy controlled tile to spoil their Control of that Objective. This can be a seriously powerful option near the end of the game when either side simply needs to score one more Objective to claim victory.

The 60 mm Mortar was a source of upgraded firepower for any platoon in World War II. The card is very powerful because it allows the Attack of each card located in a targeted tile. It is a slow card though as it requires the player to Target a space that is within three tiles of their team and then takes an additional card to Attack. The power of Blast is that the attack into a tile will provide the player with a separate Attack roll against each counter present on that tile, including their own so be careful.

I hope that you can see that this game has put a lot of thought and effort into its design and has attempted to replicate the makeup of a World War II Rifle Platoon. The actions and abilities of each card feel very thematic and provide you with a lot of choices and strategies about how you should use the members of your platoon to efficiently and effectively attack your enemy.

In Action Point 3, we will take a look a closer look at the modular board and talk about how it works in the design, but doesn’t necessarily replicate or take into account every aspect of your typical tactical combat game, which I am totally fine with as not every game has to be as deep and realistic as ASL!