In this series of Action Points we are taking a look inside the solitaire only game The Wars of Marcus Aurelius: Rome 170-180CE from Hollandspiele. The game simulates the strategic level struggle of the Romans led by Marcus Aurelius to stave off the invasions of Germanic tribes and Sarmatian raiders as they encroach on Roman territory across the Danube River. The game uses cards in a pseudo CDG format to move the game along and is very well done.

This series of Action Points is not yet finished. Not even close! We now move to Action Point 4 to look at how Battles work.

If you know me at all you know that I am aggressive and will push my advantage often and attack. Alexander knows this as well and has used my aggression against me often. But in this solo game, I don’t have to worry about that and can throw caution to the wind. If you are not attacking often in The Wars of Marcus Aurelius you will be unable to meet your victory conditions. After all, you win only if you have conquered all three of the Barbarian Tribes (Marcommani, Quadi and Iazyges) arrayed against you.

Battle is a key part of this game and you must be attacking often but also must be smart about your attacks by leveraging your cards and stacking up benefits and special bonuses to defeat your enemy as they get harder to defeat as you drive them back across the Danube and into their homelands.

Battles are pretty simple to execute. Simply discard one card to attack the Marcomanni, Quadi, Iazyges or one of the Off-Map enemies. You can also play an event to modify your roll in some fashion (as was discussed in Action Point 3). You will roll a 6-sided die for the Romans and add/subtract to the rolled number the following:

– 1 if the battle takes place during the Winter Round

+ Any bonus from the played event card

This sum is referred to as the Roman Attack Value.

Next, roll a 6-sided die for the Barbarians and add to it:

The sum of this is referred to as the Barbarian Attack Value.

After all of that, the side with the higher Attack Value wins. If there is a tie, roll again, rolling as many times as necessary to resolve the combat.

Let’s now take a look at an example.

On the Marcomanni Track the player has a full army in the adjacent army box consisting of 6 Legions being led by Marcus Aurelius and decides to attack. The player discards a card to take this action (remember the actions in Action Point 3). They then roll a 6-sided die and get a 5. They then add +1 to the roll for each of the 6 Legions and +3 for Marcus Aurelius’s Combat Value of 3 for a total Roman Attack Value of 14.

The player then rolls a 6-sided die for the Barbarians and gets a 5. Then add in the Barbarian Combat Value shown on the Marcomanni counter of 4 and add +4 for the Terrain Value in the space. The total Barbarian Attack Value is a 13 (5 + 4 + 4 = 13). This means that the Battle is a victory for the Romans. Really pretty simple. Let’s take a look at one more example to illustrate a different outcome. 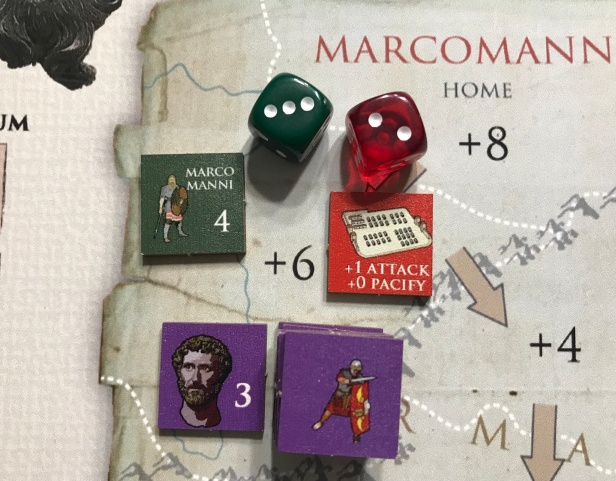 In this example, the Roman player has rolled a 2 and then adds 10 to the roll for a total Roman Attack Value of 12. The 10 comes from 6 Legions being led by Marcus Aurelius with a Combat Value of 3 and a Level 1 Fort which adds +1 (2 + 6 + 3 + 1 = 12). The Barbarian rolls a 3 and adds 10 to the total for a 13 Barbarian Attack Value. This means that the Barbarian is going to win this combat. But wait! There is one more option available to save the day for the Romans.

After rolling and calculating the total Attack Values, the player may discard one card to add +1 to the Roman Attack Value total. This can turn a defeat into a tie (in which case roll again), or a tie into a victory. You cannot discard two cards to add +2, but you can discard a card each time you roll: if the first discard turns a defeat into a tie, you can if needed discard a second card to affect the result of the second roll. This discard now breaks the tie and the player wins the battle.

What is the effect of a Battle win or lose? Great question and I will answer that with some text from the rules.

8.2.2 Effects of Winning or Losing a Battle

Roman win: If the Romans win the battle, the Barbarian army retreats one space.

If you defeat a Barbarian army in its Home space, the tribe immediately surrenders. Move its counter to the Surrendered Tribes box and gain 1 IP. If all three tribes have surrendered during the Victory or Defeat check (9.0), the game ends in a Roman victory.

Barbarian win: If the Barbarians win the battle, the Romans lose one legion (move it to the Recovery box). If you have a fort in the same space as the Barbarian army, the fort can absorb the loss instead. To do this, remove one Level 1 Fort or flip one Level 2 Fort to its Level 1 side (the fort absorbs one “hit”).

If it is the Barbarians one of two effects will happen. On a roll of 1, the Barbarian counter will get flipped to the Demoralized side (if already Demoralized then ignore this effect). This can be huge for the Romans as it will make future Battles that much simpler to win.

If it’s a 6, the Barbarian counter will be flipped to the Bold side (if already Bold, then ignore this effect).

If it’s the Romans and a 1 or 6 is rolled when in a Battle, then the following will occur. 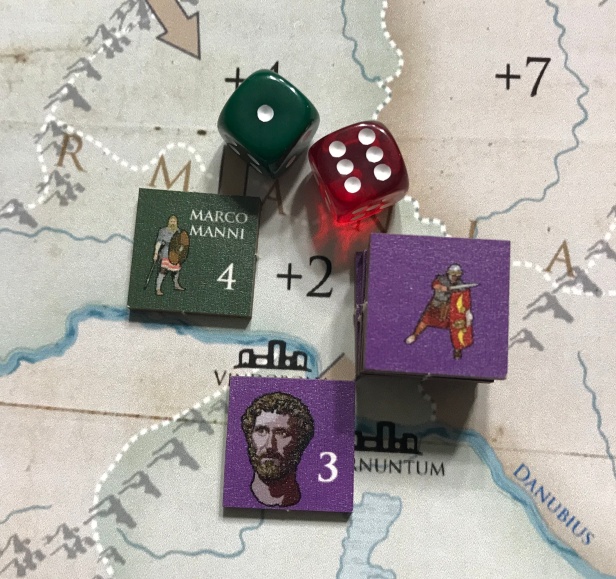 As an example of this, we see above that the Romans roll a 6 with Marcus Aurelius in command and come out with a total Roman Attack Value of 12 as compared to the total Barbarian Attack Value of 7 after rolling a 1. The Romans win the Battle and gain an IP and the Marcomanni Tribe will be pushed back one space closer to their Home space and the counter will be flipped to the Demoralized side.

I hope you got a good feel for how Battles play out in The Wars of Marcus Aurelius from Hollandspiele. There are lots of card events that can be added into Battles to improve the odds of victory for the Romans. These cards become more important as each Barbarian Tribe is pushed back and approaches their Home space. As they get deeper into their territory they become more comfortable with the terrain and understand how to use the advantages of that terrain to gain the upper hand over the Romans and this results in a better bonus to their total Attack Value.

In the final Action Point in the series we will look at the strategies that I feel are very important to use to improve the odds of winning the game. Well, you have to remember that these strategy tips are being provided by a player with a 3-8 record, although I have won 3 out of my last 4 plays. So take it for what it is worth!

9 thoughts on “The Wars of Marcus Aurelius: Rome 170-180CE from Hollandspiele – Action Point 4”