Continuing along in this series of Action Points taking a look inside The Great War (Centenary Edition) from PSC Games. In Action Point 1, we took a look at the Command Card System and how the cards are used to drive the action. In Action Point 2, we looked at the different units represented by really cool 15mm sculpted plastic minis that all have unique capabilities. Now we are ready to look at an example of Battle and the custom dice used to resolve the action.

Battles are resolved one ordered unit at a time and in the order chosen by the phasing player. Ordered units do not have to Battle, even if adjacent to enemy units. The also unit cannot split its attack between several enemy units. The number of casualties taken by a unit (remember a unit consists of 4 figures) doesn’t effect the number of battle dice the unit will roll in combat. Even a unit with only one remaining figure will be entitled to roll all the dice they are entitled to based on the unit and its range to the target.

But before we get into the nuts and bolts of Battles, I need to make sure you know what the symbols on the dice mean. 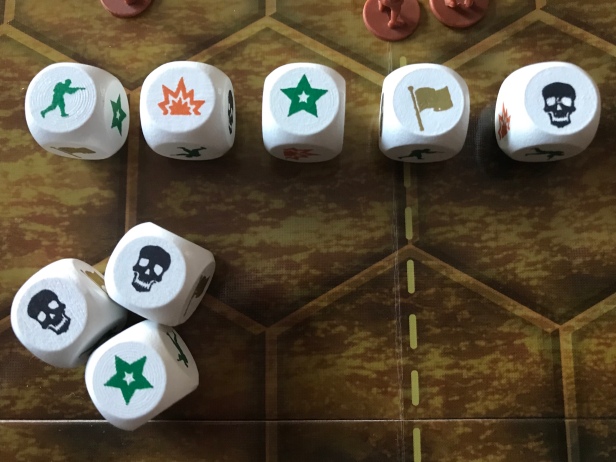 There are 8 total Battle Dice provided in the game with custom symbols. The symbols on the dice include Soldier, Burst, HQ, Flag and Deadly and each has a specific function. On one single die, there are 2 Soldiers and 1 each of Burst, HQ, Flag and Deadly. A Burst and Soldier symbol will equate to a hit while a Flag means one unit must be retreated after casualties are removed. The Deadly symbol is a hit if a Special Personnel Bomber Figurine is involved in the combat and finally an HQ symbol means the player will collect an HQ Token from the pool which can be used to pay the costs to activate certain cards and to buy Targeting Dice when a Reserve Artillery strike is called in from off-board.

A battlefield unit with ranged weapons battling an enemy unit that is more than 1 hex away is conducting ranged combat. This requires that the attacking unit is both within the range restrictions of their weapon and has line of sight, unless the unit is a Mortar. There also is a restriction that a unit that is adjacent to an enemy unit cannot conduct ranged combat against another more distant unit.

The procedure for ranged combat is simple. First, the attacking player announces what unit is firing and the target of their ranged attack and ensures that they have line of sight. They then consult the units range and determine the number of battle dice that they will roll. This number can be modified by cards that were played or by certain terrain such as moving onto a hex containing a Forest, Building or Wire where the unit will lose 1 Battle die.

The dice will then be rolled and hits will be applied to the target before any retreats. The player will then collect any HQ tokens and will then end the ranged combat. Really very simple. Here is an easy example of a British Machine Gun unit attacking a German Rifle unit located in a trench fortification.

In the above picture you can see that there is a British Machine Gun unit 2 hexes away from a German Rifle unit located in a trench and adjacent to the trench is a British Rifle unit that is readying itself to perform a Close Combat on the German unit after the ranged attack occurs. There is no Line of Sight blocking terrain in between the MG unit and its target, such as a Hill or Building, so a ranged combat can occur. 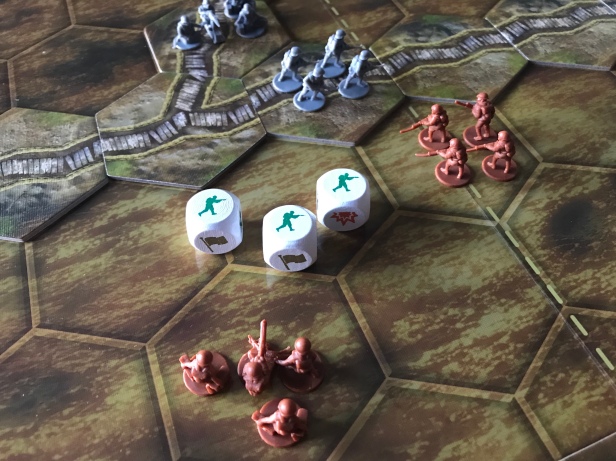 The MG unit is 2 hexes away and as such will roll 3 battle dice. The roll is an excellent as 3 Soldiers are shown on the dice. Now after rolling, the terrain modifiers will be enforced. A trench will allow the target units to ignore 2 Soldier symbols and 2 Flag symbols on a ranged combat. So even though 3 Soldiers were rolled, only 1 hit will be applied causing 1 figure to be removed from the German Rifle unit.

As you can see, the British Rifle unit is located adjacent to a German unit and cannot perform a Ranged Combat into that hex or to a more distant unit. If they wish to attack, they will have to choose Close Combat.

Close Combat follows the same procedure as Ranged Combat. The attacking player announces that the unit is performing a Close Combat and identifies the target which must be adjacent or become adjacent after a single hex movement for a Rifle unit (an MG unit cannot move and attack). 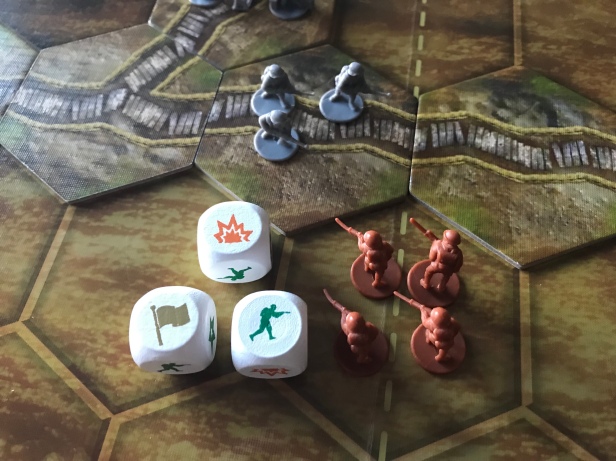 The number of Battle Dice to be rolled is determined by the type of unit (all units get 3 dice while the presence of the Special Personnel Bomber Figure grants 1 additional die in Close Combat) and then is modified by terrain if any adjustments. The dice are rolled and all hits and retreats are then modified by the terrain that the Close Combat is occurring in (such as in a trench 1 Soldier and 1 Flag symbol can be ignored). Burst symbols are always hits in Close Combat.

If an ordered unit attacks in Close Combat and eliminates or forces the defending enemy unit to retreat from the hex, they can then advance into that hex in a successful gaining ground attack. Although this gaining ground is not mandatory.

In the above example, the British Rifle unit rolls 3 Battle Dice and gets 1 Burst, 1 Soldier and 1 Flag. Because the defender is in a trench, they can ignore 1 Soldier and 1 Flag but will have to eliminate a single unit from the Burst symbol. As you can see in this example, attacks of all kinds in The Great War are very ineffective as there are many fortifications such as craters, trenches and wire. The way to make them more effective is to use Combat Cards wisely and build your hand for effective attacks. Any cards that provide extra Battle Dice or activate several units to fire together, such as the Machine Gun unit’s cross fire capability, will improve your chances of victory in this game.

I hope that you have enjoyed this walk through the mechanics of The Great War. This game is a very simple yet extremely fun look at the rigors and difficulties of World War I. I have enjoyed our plays and would recommend this one to anyone that likes a lite, and sometimes random, dice chucking wargame. Look for my written review in a few weeks and thanks for following along.