I’ve played several post-apocalyptic themed board games over the years. They all have purported to be gritty, dark, and gruesome struggles to survive. They have tried to sell me on that fact, and more often than not, they have come up woefully short. Why? Well, they all share the same deal breaker. How do you possibly craft a believable and realistic narrative about the continual fight against death, an attempt for survivors to scratch out enough food, water and weapons to possibly have a chance to survive, without telling the story? If I don’t have the details behind the stouthearted attempt to remain above ground, how can I possibly experience that feeling of all consuming dread and terror? That is where they all have failed…in the narrative!

Sure, I could construct my own detailed chronicle filled with the reasons why the world has gone to hell in a hand-basket. I could also create a comprehensive back story for all of the characters, villains and bystanders involved in the unfolding drama. But really, who has time for that?

But in addition to the element of the story behind the game, I also want to really believe that I have a chance to make it out alive. I want to have a hope, however slim or unwarranted, that I have a real shot at making it through the coming years filled with indescribable difficulty and horror. After all, if there isn’t any hope, why would you want to survive?!?

Fallen Land: A Post-Apocalyptic Board Game from Fallen Dominion Studios 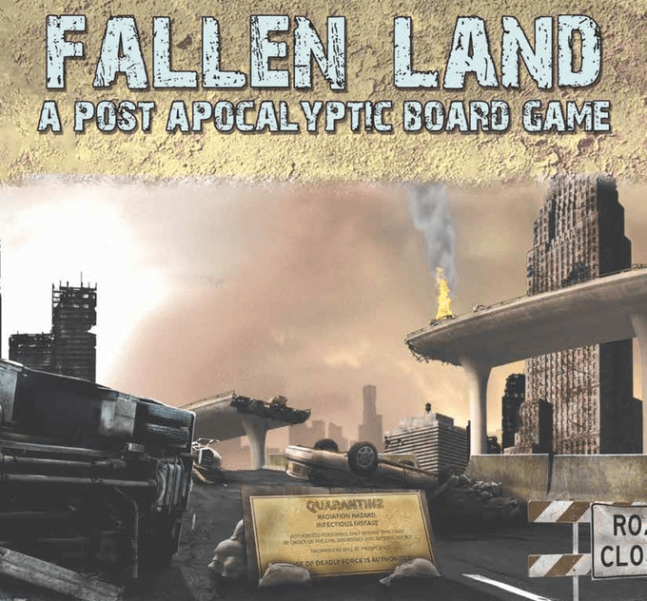 Fallen Land: A Post-Apocalyptic Board Game from Fallen Dominion Studios is an apocalyptic game that gets what it should be about. Mainly, the story of survival. The game is a narrative based card game that sees players controlling one of 10 factions trying to eek out a living in one of the most desolate and stark future realities of the United States of America that I have ever seen, with vast irradiated swaths of land that will make you sick if you enter, to marauding bands of raiders bent on your destruction and the more subtle hidden dangers ever present in a world gone mad, such as Bad Betty and her Carnival of Horrors. These factions are specialized and have learned to survive in the “Fallen Land” their own unique way.

This take on variable player powers sees these Factions truly feel different, as they each start with a certain number of predetermined Town Technology chips that provide them bonuses as well as Specific Faction Perks listed on their Faction card. 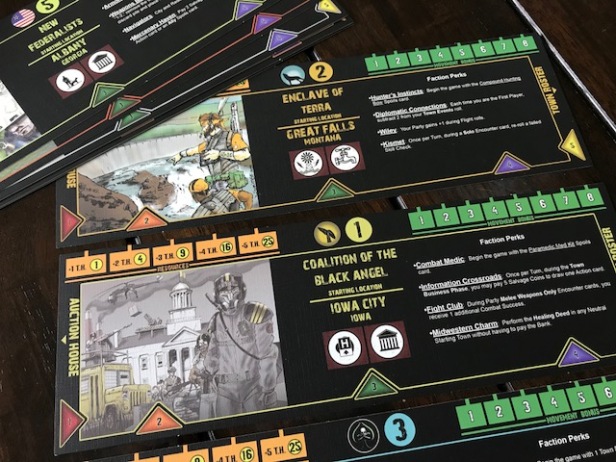 The Town Technologies are really important to the progress of the game. The main reason for their importance is that they will aid in Skill checks by providing a certain number of automatic successes. But secondly, they provide victory points in the form of Town Health and Prestige. To win, one of two Victory Conditions is necessary, either 20 Prestige or 80 Town Health. Prestige represents your reputation as a leader, while Town Health represents your town’s prosperity and number of its citizens. Both conditions are marked on their respective Victory Tracks bordering the map. These two Victory Conditions are mutually exclusive and you can realistically win by focusing on one or the other. You will gain benefits from both but you don’t have to necessarily do it all. 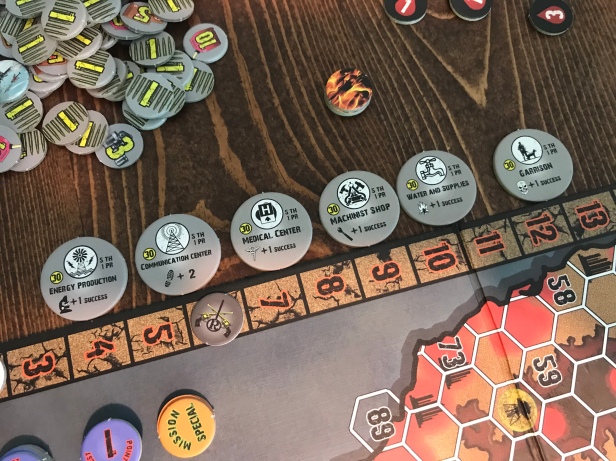 The game is a huge sandbox that sees players go about trying to complete different missions and challenges that are presented to them through the cards. And man are there a lot of cards! Literally hundreds which give variety and create replayability. But more than just that they are the heart of the game and make it stand out from the other apocalyptic games out there. First off, each card has a story. The card has been painstakingly crafted to fit into the lore of the land and actually creates a believable setting for the actions. 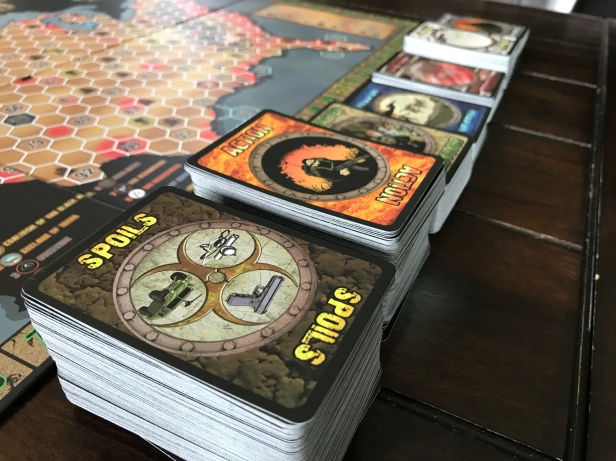 Then there are literally hundreds of unique action cards, characters and individual pieces of equipment and weapons that make sense. Some of these cards have “borrowed” from pop culture on the subject as we actually encountered and fought a “terminator” and found a katana very similar to a certain female bad ass character in another post-apocalyptic universe. I have looked through the many cards and actually marveled at the amount of work and commitment that this effort would have taken. Even with a team of 3 or 4 writers, to create this many stories and encounters would have taken years. I want to play a game that has this much of the designers’ time in it. It shows their level of commitment and care to the project and is due to bring out the best in the experience. Kind of like that chili that has been stewing all day, blending flavors from spices and ingredients, to create a truly satisfying taste as you take the first bite 12 hours after starting it.

The variety provided by the cards is another of the game’s strengths. It ensures that every playthrough will be different. In fact, after adding in the two expansions (A Journey into Darkness and Outrider’s Trading Post), I am not sure we will encounter all of the cards in twenty plays. Each of the cards is not only deep and rich with narrative detail but they are also seemlessly and thematically integrated creating a truly enjoyable play where each player, whether it is their card or not, are hanging on every word as it is read just to see what will happen. 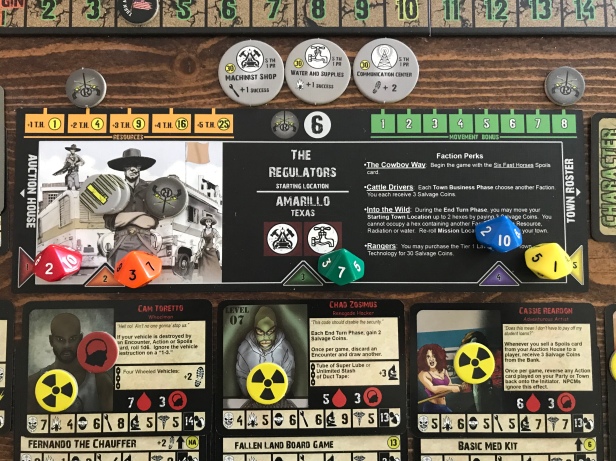 The thematic element comes from how the skill checks are done with each of the encounters. These checks usually are well thought out and the correct difficulty is put on each aspect to reinforce the theme of the encounter. Not every encounter requires high Combat ability but some take a silver tongue (Diplomacy), a gear head (Mechanical) or someone who is familiar with equipment (Technical). The requirements that come with each encounter just make sense and feel right. For example, one of the more memorable encounters from our plays was the drunken fight while my party was driving. You had to randomly pick two characters to then fight in the car while the others had to use Diplomacy and Technical skill checks to stop the car and prevent a wreck. If you succeed, nothing really happened but if you failed you will randomly lose one of your characters. Talk about tense rolls as I was just sure I would lose my best party member to this drunken melee.

The variety in the character cards is also amazing and once again fits into the narrative of survival. The reason these characters have survived this long is that they have skills. These characters also can attach certain equipment cards to improve their abilities as well and this adds to the customization aspect of the game. For example, some characters are better with hand weapons and if have two equipped will get an automatic bonus. This lends itself to players the searching the Spoils deck to find those hand weapons.

The characters also have unique art that brings out who they are and set the basis for each character’s strengths. The art is also good and helps players immerse themselves into the theme of the game. 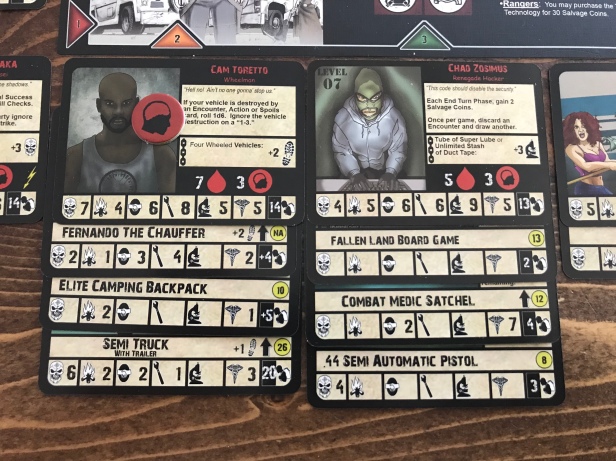 The map and movement was one of the elements I felt should have been better. Not in the look. I am actually impressed with a game that uses hexes as I think they are fantastic to represent terrain. But I felt that their was little tactical thinking needed in regards to movement. You will try to look at your opponent and the location of their Town in relation to scarce resource points and missions and try to beat them to certain points first, but I wanted to see the terrain play more of a role in the movement decisions.

Terrain is so varied, as it represents that of the wide open spaces of the United States of America, and placement rules for Towns so random, that it is possible for players to be nowhere near each other in a 2 or 3 player game or conversely right on top of each other. I would have liked to see some more tactical uses of the terrain to create difficulty and challenge but the challenge comes from the movement system itself. If you roll well, and have been fortunate enough to find good vehicles, you can pretty much move as much as you want. If not, it will be slow going.

I did like the different deadly terrains, such as the irradiated zones and the rules for exposure. These kept me thinking about risk versus reward and led to some of my characters getting really sick occasionally. 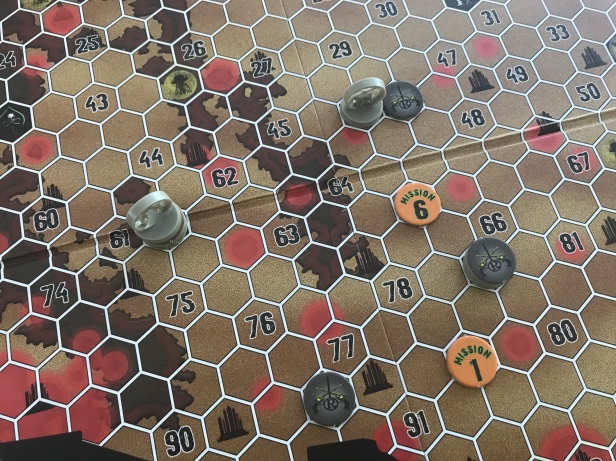 What kind of a post-apocalyptic game would it be without the element of “Take That”?!? If you don’t like confrontation in games, this game might not be for you. I have found that at least half of the Action cards are geared toward doing damage to the other players. This is good as it gives a built in way to slow down the runaway victor who has had really fortunate card draws. But it also can severely slow the game down. Many of the cards simply see players stealing items or technologies from each other, killing characters or erasing hard earned Prestige.

While this is very thematic and gives me that brutal, take-that, struggle for survival feeling, it can also be a means of simply making an already long game that much longer. But, that is the price you pay for making sure the game is hard. I can tell you that I have worked my tail off at times to gain a few Prestige only to see them taken from me. I have also done this to others as it is a part of the game and thematically the post-apocalyptic world is about survival and doing that any way that you can. 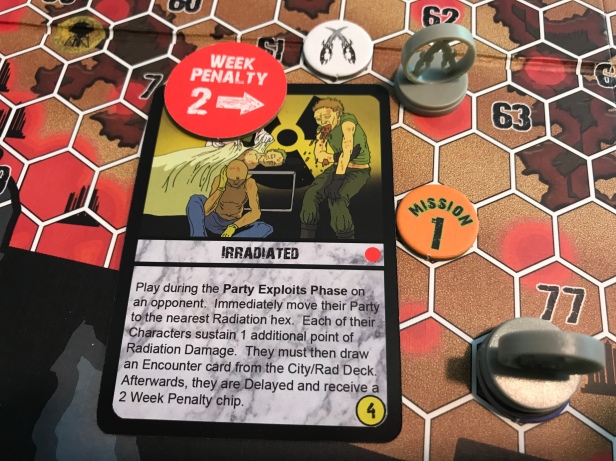 In the end, Fallen Land is a joy to play. I love the narrative and the concept of searching the land for that rare piece of equipment that I need to trick my character out to be able to take on some of the challenging encounters. The game is not heavy, and frankly involves a great deal of luck, as most games centered on card drawing and dice rolling are, but succeeds where so many other dreary post-apocalyptic games fail. It succeeds in giving me hope that I can shrug off the devastating effects of the last tragedy that befell my team, to truly believe that I can succeed at the game of survival and win! Each time I get hammered, I just suck it up and get back to it. The tragedy is bad and hurts for the moment, but I always know that there are tragedies awaiting my opponents as well. I will persist and eventually have a chance to survive to win.

If you like narrative, and you enjoy immersion into theme, then get this game. It plays long though, and can have a lot of downtime as players take their turns, but the joy is in the experience and seeing how your opponents are doing.

If you are interested in learning more about the game and getting an inside look at the design process, read our interview with co-designer Jon Lonngren.

You can also check out our unboxing video for the base game and for the first expansion A Journey Into Darkness.

3 thoughts on ““The Story of a Brutal, Take-That, Struggle for Survival in the Radioactive Wastes of America…but with a Glimmer of Hope!” – A Review of Fallen Land: A Post-Apocalyptic Board Game from Fallen Dominion Studios”