Strategic level games like this one is how I originally got into wargaming, and I think I’m not alone in that. We’ve all played Risk and Axis & Allies over the years, and each of those games has their merits, but Hitler’s Reich tries to inject a bit more historical accuracy into the experience in a condensed time frame. The box touts the game as WW2 in two hours, which would be an incredible feat. Part of that is made possible by starting the game in 1941, so France has already fallen as has much of Scandinavia. Even with that, I would say this is closer to a three-four hour game, especially for newer players.

So, what is Hitler’s Reich? If you look at the picture of the game board below, you’ll see it’s pretty sparse with regards to playing pieces. That’s because the game is at such a removed scale that those pieces are entirely unnecessary. Through card play and dice resolution control of regions and countries is determined. If you gain control after an Attack, you simply put out a circular piece of your color (black for the Axis, red for the Soviets and Royal Blue for the Western Allies) to denote that control. The only other pieces are the long sticks which represent Fleets in ocean spaces – these give a modifier in battle for control of said ocean space, and the hexagonal star pieces which are static fortresses that give a bonus in defense only.

So you can see, the game doesn’t consist of a lot of pushing pieces around, it’s not even a traditional area control game where you’re putting in cubes or something like a “dudes-on-a-map” style game. Hitler’s Reich presents a challenge to me as a reviewer to even categorize it. I actually struck up a conversation with someone at WBC this year that had the game under their arm, and had a pretty enlightening conversation about it. They argued that Hitler’s Reich isn’t really a traditional wargame in any sense of the word, but is more an abstract strategy game. After pondering this statement for awhile, I would be inclined to agree, at least to a certain extent.

You see, the game has included a few pieces of historical chrome to it like the special mechanics and processes for Operations Barbarossa, Overlord, and Bagration. There’s a limited capacity to blitzkrieg, and a stack of Event Cards with great connections to history that give essential bonuses and abilities to a player. But all of that is ancillary to the basic concepts of action resolution the game presents. You have a hand of cards (I know, I know, but it’s not a CDG I swear) and to do most of the basic actions, like building fortresses, Fleets, reorganizing, etc. you just discard a card, without concern over the value or suit of that card, and do one thing. Only when you want to take control of an area – land or sea – or you want to acquire a new Event Card do you play the card for it’s value.

Each player has a deck of 29 cards. The axis has 14 Italian, 14 German and a special Spy Ring card. The Allied player has 14 Western cards, and 14 Russian cards with a Spy Ring of their own. The cards simply have a number on them, 1-14, and the nation’s symbol which denote them as a suit. Some of the higher valued cards also come with re-rolling abilities. Both Allied card types are played straight up.

The Axis’ cards are a little different, in that a German card wins all ties, and an Italian card loses all ties (a dynamic that I really loved/hated in-game because it can be jubilant or absolutely crushing in key situations). So to perform an Attack, you each choose a card and secretly place it face down. When ready, each player simultaneously reveals their cards, each player then chucks a number of dice, usually at least three, unless one player controls more adjacent territories of sea zones, or have played an Event Card that grants an additional die, and you total your dice results along with the value of the played cards; highest total wins.

There’s a few modifiers in the game that will add extra dice to your rolls, and maybe a re-roll from your card or an event you choose to activate, but that’s it. So, back to the whole abstract game thing, reflecting back on our first couple of plays I’m inclined to give that assessment a nod. You’re just placing out discs and removing them in a back-and-forth struggle in important spaces. On the Eastern Front for example, Bessarabia, if captured first, provides the Germans the best (read even) basic odds to take the adjoining East Front spaces. Here’s something I really liked, the layout of the board is deeply strategic, although can sometimes feel scripted. It’s more advantageous to attack space X to get a bonus for space Y, if you reversed the order both spaces are at bad odds instead of just the first. This is a key to this game and this was a neat and strategic point that we enjoyed. Several plays will reveal the order of spaces that must be attacked to even odds and that felt thematic to me, albeit slightly canned. All in all, a necessary part to the theme of the abstract wargame. 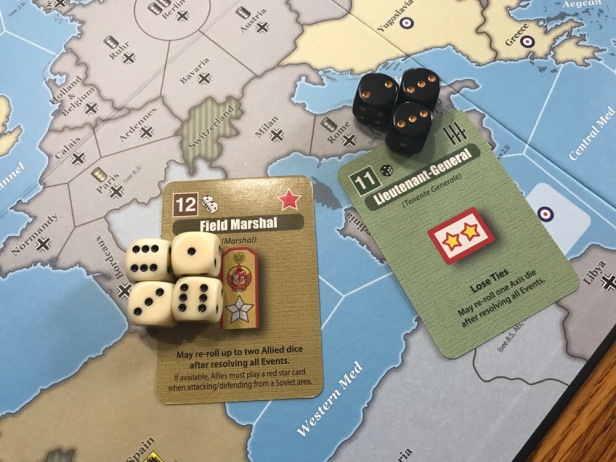 I kept having to remind myself that this game isn’t some stuffy wargame. It’s more a war themed game. The bluffing card play is really fun, and there’s a few special cards like the Spy or Saboteur that can really mess with the opponent by removing either the value of their card, or the re-rolling capacity of their card. Plus with any dice chucking game you get an added layer of tension when you both roll off trying to capture those precious oil fields. All of these help to keep the game fairly light. You must remember that point, this is a light war themed game and not an overly complicated and deeply strategic affair. There is strategy to the game, don’t get me wrong, but this isn’t something as grand as implementing The Schlieffen Plan. At the time of playing, I kind of hated how random and arbitrary some of the game felt during extended periods of stalemates/back and forth, but looking back, I think I had the wrong expectations for this game. I wanted it to be something it is not. The game’s rule book is a little suspect, but it’s a really simple game to teach and you could play this with almost anyone that has the inclination.

This game deserves a chance, but it also deserves a good editor as well. Seriously, the first time we played the game, the rulebook was a nightmare. Partly due to the writing, but also partly because of the game’s unique mechanics and style. It’s a difficult skill to communicate rules to people clearly, and even more difficult when those rules are relatively foreign to the given audience. Like I said, this game is really simple and easy to play, but the rulebook is a hindrance at times due to the layout, wording and omission of key rules that are only found in the playbook. The good news here is that a second edition rulebook will make this a good game as these problems will hopefully be cleared up. And the system is fun, and lends itself to some interesting applications. In the future, I think we’ll see a few more in this series covering other conflicts or even on different scales and time periods. There’s a lot of flexibility for the application of the card/control interplay.

One other suggestion we discussed for improved clarity is the use of mnemonic devices on the year track that will help new players, and players without a great deal of historical knowledge, remember when certain events are added and when various operations can be undertaken, such as Operation Overlord. This would have helped in our first game not miss important elements that we just forgot. Try landing in Fortress Europe without the proper cards and you will come to know despair!

Hitler’s Reich is an interesting game, for sure, and the quick playing time is an appealing factor for many. There’s a very healthy dose of randomness from card draws to dice chucking, and whilst there’s some way to mitigate those factors, the game will put you in situations where you sometimes just have to go for it. This is isn’t some deep, rich dissection of mid century grand-strategy, rather a platform from which you can play a back-and-forth style struggle on a scale that almost removes the theme. An example of which is the entire North Africa campaign is basically boiled down to placing a disc and removing said disc a few times for control of Tobruk. There’s nothing inherently wrong with that, just understand this isn’t a study about grand campaigns, but more about managing your strategic resources (hand limit, Event Cards, etc.), luck, and guts.

The couple of times we played had some interesting concepts in them, but I think I was expecting the game to be something that it wasn’t. Approaching this game as something more like Chess, Go or Checkers might give you a better experience, because from a WWII standpoint, the game is very scripted due to it’s short, grand scale which was disappointing. When I took myself out of the war, the game itself is a very enjoyable card playing dice rolling control fest that reminded me of elements found in Othello, Smallworld and other entirely different style games.

If you want to get a clearer picture of how some of the mechanics work for Attack and Conflict Resolution for Event Cards, you can check out the Action Points that Grant wrote on the blog earlier this week. Action Point 1 takes a look at Event Cards, how they are used and more importantly how players use Conflict Resolution to obtain the cards that they need while Action Point 2 takes a look at how an Attack works for a Land Area and in a Sea Zone and the various modifiers involved.

6 thoughts on ““Deutschland, Deutschland” – A Review of Hitler’s Reich: WW2 in Europe from GMT Games”