The last few months on the Monthly Update front have really been pretty decent with new games offered each month, along with some great news about things like the fabled Annual Sale. But this month, things have been dialed up to 10 as there were two new games added to the P500. And, what makes these additions even better is that the games are both from the great Mark Herman, whom Alexander and I really appreciate for his designs of such great games as Pericles: The Peloponnesian Wars, Churchill: Big Three Struggle for Peace, Empire of the Sun and Washington’s War. Reading the update this month was a true joy and I am really eager to get to both of the games that were announced.

In case you missed the Monthly Update Email, here is a link: http://myemail.constantcontact.com/May-18-Update-from-GMT-Games–New-P500s–Production–General-News–More-.html?soid=1103480314715&aid=pLIltY2b6ow

So without further delay, onto the news in the Monthly Update.

2 New P500 Additions including Something New and Something Old…

As I mentioned in the opening of this post, there were 2 new games offered on P500 this month. “New” is an interesting word choice here as one of the games is an enhanced version of a game previously released by Victory Games. Both of these new games are designed by Mark Herman and the 2nd of the two is a co-design with Geoff Englestein (who recently designed Fog of War published by Stronghold Games). I will take a quick look at each of these games and share my thoughts on why I will be adding each to my P500 list.

Good solitaire wargames are hard to find! Don’t get me wrong, many wargames can be played solo by the player simply taking the best possible actions for each side but a true solo design wargame is a rare thing. First off, if you haven’t experienced a GMT Games deluxe edition, you don’t know what you are missing. This treatment means new art, upgraded components, a full on mounted map, thick counters and a redesigned and reorganized rule book with a fantastic play book as well. Deluxe editions are fantastic offerings!

This strategic game of ancient warfare allows the player, with a unique new solitaire system, to try and accomplish a lasting peace. All existing solitaire systems on the market have the player take one side for the entire game. Unfortunately this pits the player against a random system with poor strategic direction. In Peloponnesian War you get to play both sides, pitting yourself against the best you can offer. If the game system is winning, the player is forced to continue with the losing side. Success, on the other hand, will eventually force the player to change sides and recover the losing side’s fortunes. The duration of the war and the player’s performance determine victory. In this manner the player competes against himself in the classic tradition of the Greek tragedy.

This game simply sounds fantastic! I like solitaire games but my biggest concern is that typically the AI doesn’t offer a realistic experience. In this system, players will be challenged and the game will simply go on longer if you can’t do things right and best yourself. Really looking forward to this game.

If you are interested in The Peloponnesian War, 431-404 BC, you can secure a copy for the reasonable P500 price of $45.00 at the following link: https://www.gmtgames.com/p-710-peloponnesian-war.aspx

Alexander and I are both huge fans of Churchill: Big Three Struggle for Peace and we both love the conference mechanic in this game. The strategizing and outmaneuvering that takes place is simply delightful and really gives players the feeling of bargaining over issues that are important to each faction. In Versailles 1919, a similar concept is carried over with some new mechanics, including a card bidding mechanic. From the game page, we read the following:

On November 11th, 1918 an armistice halted the killing field that was The War to End All Wars. To make peace, Woodrow Wilson (United States), David Lloyd George (United Kingdom), and Vittorio Orlando (Italy), were hosted by President George Clemenceau (France) in Paris, and sat down to write what would become the Versailles Treaty. The treaty was signed on June 28, 1919, after six months of acrimonious debate and bargaining between the great powers.

Versailles 1919, created by designers Mark Herman and Geoff Engelstein, allows you to experience this piece of history as one of the four leaders with a national agenda that must be satisfied. As one of the Big Four, you sit in a conference room gaining influence on the issues present in the room. Hovering in the waiting room sit other issues and personages who are waiting their turn to make their case to meet regional aspirations such as self-determination. Will you support Ho Chi Minh’s attempt to free Vietnam from French colonialism? Help Prince Feisal establish a new nation in Mesopotamia or Chaim Weitzman create a Zionist state? Work with TE Lawrence to reduce unrest in the Middle East or with Ataturk in Anatolia?

This game is designed as a more accessible and easy to learn version than Churchill but still will generate significant interest from wargamers who have enjoyed Mark’s other creations in this area.

Also, the game will also have a solitaire system included as I learned just yesterday from a tweet from GMT Games. 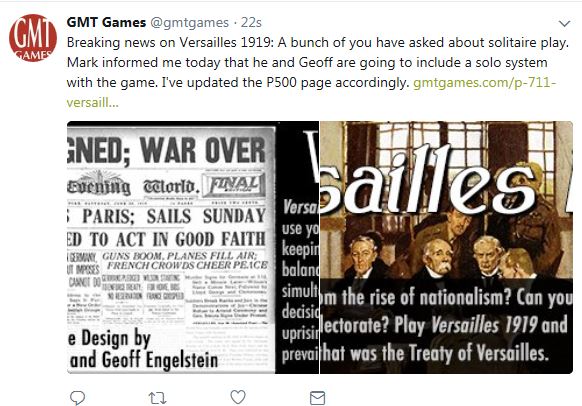 This feature has quickly become one of my favorite parts now about the updates. Each month, Gene teases us with cryptic reference to upcoming P500 games. Most of the time, these references are vague enough that you will be required to use an Enigma Code Machine to break them. But, I give it a go each month and have had a few correct at times. Here are those “hints” with my best guesses:

What are your guesses for these upcoming P500 games? Gene, did I get anything correct?

I don’t know if you really care about this list, but as I always tend to end these posts, I will post a summary of where my (now) 35 P500 games stand as of May 22nd. I routinely check the status of each of my games and also will show the change in orders as compared to the last time I wrote them down on April 26th.

There are lots of great games from GMT to get excited about. I have seen my P500 list grow and grow over the past few months, and it doesn’t appear that there is relief in sight. I am fine with that but my gaming budget is definitely not going to be. Over the next 6 weeks, TPA will be busy as we will be receiving 7 new games over the next few weeks including Cataclysm, Fighting Formations: Kharkov, Fort Sumter, Gallipoli, 1914, Hitler’s Reich, No Retreat 3: The French and Polish Fronts and Skies Above the Reich.

15 thoughts on “May Monthly Update from GMT Games – A Mark Herman Double Feature!”