I hope that my chosen picture hasn’t run you off. I just think that a majority of people think of RISK when the topic of a board game focused on war comes up. I assure you RISK is not included in this article, except to draw a comparison to one of the games on the list that does share some of it’s mechanics and way of dealing with combat…but that’s it. Nothing more! Promise. This chosen topic today for this entry of the Best 3 Games with….is a little bit hard to clearly explain. I titled it “Euro Military Theme” and what I mean by that is three fold. First, the games I feel fit into this category have combat/conflict in them but the combat isn’t traditional wargame conflict with odds calculations and DRMs. The combat can resemble well known games such as RISK, as mentioned above. Second, the games’ theme has something to do with warfare. Whether it is involved in one of the World Wars, ancient warfare from the Bronze Age or various other conflicts from history. War is somehow included in the game. Thirdly, cards play a large role in the game, but not like a Card Driven Game (CDG) kind of role.

Let me try to give you an example of what I am talking about using a game that I have played but didn’t necessarily make this list. 1944: Race for the Rhine from PHALANX is a Euro Military Themed game. The concept behind it is that you are acting as if you are the supply chief or quartermaster for one of the three well known Allied Generals from World War II (Patton, Montgomery or Bradley) fighting to make it through France after the Normandy landings in 1944 to get across the Rhine River and into Germany as quickly as possible. You have to attempt to advance against growing German resistance, taking risks in order to secure certain advantages, and also focusing on making sure that your supply lines are protected and that your armies are adequately stocked with food, ammunition and gasoline. There is fighting but it is different than a stack of counters in a hex going against another stack of counters to see who does the most damage. This is the type of game that I am talking about in this post. Do you get me? In fact, 1944: Race to the Rhine would have made this list if I had a few more opportunities to play it but I’m just not ready to make a judgment on the game yet. What games did I include on my list that do this well? Let’s find out.

The first game up on this list is 878: Vikings – The Invasions of England from Academy Games. This game is the first release in their new Birth of Europe series, and I hope to see many other topics covered in future entries. This game is very similar, and uses many of the same mechanics as games in their Birth of America Series such as 1754: Conquest – The French and Indian War, 1775: Rebellion and 1812: The Invasion of Canada. One of the reasons that this game made this list is that it uses a historical theme, that of the continual attempts by the Vikings to raid England and claim land and glory for themselves. The game uses wargame mechanics such as a blind chit-pull (they are actually large plastic cubes color coded to each faction) to decide what side gets to act first but focuses on more Euro mechanics such as the use of cards to activate and move armies into Battle. The Battle system is simple but fairly clever and you really have to have a good understanding of the dice makeup of each of your units involved in order to be able to be effective. In fact, the system really reminds me a little of RISK.

A Battle happens when opposing units occupy the same Shire. There can be multiple Battles in each round and the active player gets to choose the order in which they happen. The defender always has the initiative and therefore gets to roll their Battle dice first, removing any casualties from the enemy force and any of their own actions as well, such as Flee or Command (where a unit can be moved to an adjacent space occupied by that factions’ pieces). The attacker then rolls their dice and applies the results. Battle will last until one side or the other is the only one standing in the space.

The number of dice that are rolled are determined by 2 factors. The type of units involved in the combat and the number of those units. For the English, Housecarl units may roll up to 2 dice, while Thegn units can roll up to 3 dice and their Fyrd brethren can roll up to 2 dice. In order to roll the number of maximum dice though, there must be units of that type up to the number of dice. For example, if there are only 2 Thegn units in a given Battle, they can only roll 2 dice, not their maximum allowed 3. If they lose a unit, they will then only roll 1 die in future Battle. This mechanic reminds me a little bit of RISK, as mentioned earlier. But the system works well for this level and difficulty of game and the dice symbols really add some interesting outcomes. I really have enjoyed this game. 878 is a light wargame and will not confound you with the multitude of strategic choices that it offers. That being said, there is enough strategy here that you must be aware of your situation and that of your enemy. If you just willy-nilly attack, you will lose. A great implementation of a war theme using mainly cards, dice and Euro mechanics.

2. I, Spy from Lost Boys Productions

I, Spy from Lost Boys Productions is a game about trying to gain the most power and influence for your empire, while not letting other players know the identify of that empire. You take on the role of a spy who is secretly working behind the scenes during the turbulent period of pre-World War I Europe. As a spy, your goal is to carry out various actions that will help your nation to advance on the global Power track through the accumulation of Influence points while also working against your opponents to degrade their power base. The most important task that you have been given is to protect the identity of your employer nation, as if you are discovered, it will make it easy for the other spies to go about destroying your nation and more easily foil your efforts to score well at the end game. 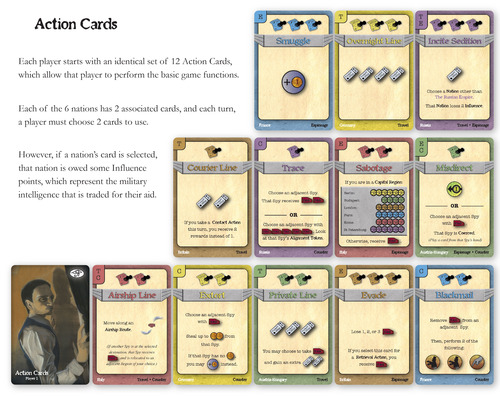 carry out actions. In this deck, there are two cards that are directly aligned to each of the 6 nations including Britain, France, Italy, Germany, Austria-Hungary and Russia. When these cards are played, at the end of the round, they will provide Influence to that nation based upon the number of symbols of that nation printed on the card. Each of these cards has a different action and if a player wants to use a specific action, they know that it will provide Influence to a particular nation at the end of the round. These actions include all types of options for the spies, including traveling, either by railway or by airship, taking Influence from nations, harassing other spies by “tagging” them to steal their cards (this is the “combat” mechanic in the game and is really quite fun), their money or to get a look at their secret Alignment token, or blackmailing them to be able to put some particular available politicians in your pocket for end of round scoring. In order to help your own cause though, you will also be helping others. But you must manage this and stay in close contact until you are ready to make your big move.

I love this game as it has all the right elements including bluffing, hand management and deduction to make for a fun gaming experience with high interaction that also has high replayability. The theme, which revolves around World War I and its imminent outbreak, is fantastic and really shines through in the various actions available to players. There is something very satisfying about going an entire game, taking actions that both benefit you and harm you, only to have someone unable to guess your nation at the conclusion. I also really liked the “combat” in this game, as it is not between armies, but between spy networks that are working to take each other’s cards and money and to out their identities to get a peek at their alignment token. Great take on this Euro Military Theme category. 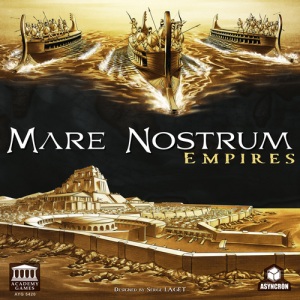 The top spot on this list goes to another title from Academy Games, Mare Nostrum: Empires. This game is simply fantastic and I have yet to win it, although I have been really close on three separate occasions. The game is so good, that I don’t even really care. Mare Nostrum: Empires is a hodge-podge of mechanics that revolves around combat, but combat is not really intended to destroy your enemies, but to capture territory in order to build a wide and diverse trade network that will provide you with the most varied goods allowing you to take advantage of the trading aspect of the economic side of the game as well as set collection.

How exactly does one win when playing a game of Mare Nostrum? Well, let me count the ways, and this is the element that really makes this Euro Military Themed game:

The second phase is trading resources and this phase is really critical to final victory in this game. The trade leader selects how many commodities each player MUST trade in the phase and then each player places that number of commodities in front of their player screen. (Player screens are provided to hide the number of resources a player has.) One at a time, players select a commodity from another player which leaves you with a different mix of commodities than possible by just collecting them from your own supply. Remember that in order to build a player must have a sufficient number of coins OR a sufficient number of unique commodities.

The third phase is for building. You can build a control marker to lay claim to an area and you can only build other structures in areas you control.  From there, you can build caravans and markets to increase your commodity collection, legions, triremes and fortresses to improve your military chances, or cities and temples to increase your control and coin collection. You can also use your build turn to build a Hero or a Wonder. Heroes and Wonders can provide special abilities as well. Choose these wisely and align them with your victory strategy.

In the fourth phase, players can finally march and fight, including great battles at sea. With land battles, if you march your legion into an area where a competitor already has a military presence, there MUST be a battle. Battles are simple to resolve and, yes, dice are involved. So, there you have it. Mare Nostrum: Empires is the king of the Euro Military Themed games and I love it. I have seen players focus solely on military power and destroying their enemies and lose pitifully. The game is about balance and using your military power to get what goods you need to build what you want. Great game!

Please let me know what games you feel fit this chosen topic better than the three I chose and thank you for reading.