Since being in the hobby just over a year now, this is probably my favorite mechanism in modern board games.  I just simply love the strategy it gives and the many different ways to implement it.  Many people feel like worker placement is very specific.  That the only way that a game is considered a worker placement game is if you can block other people from doing something.  To me, worker placement is any game where you take actions by using a “worker” of some sort.  You are given a certain amount of actions each round and you use those actions by placing out on a board to get resources or complete an action.  It may be to block other players from doing that but it might also be getting there before another player.  There are tons of different worker placement games out there.  So what made my Best 3?  Here they are….. 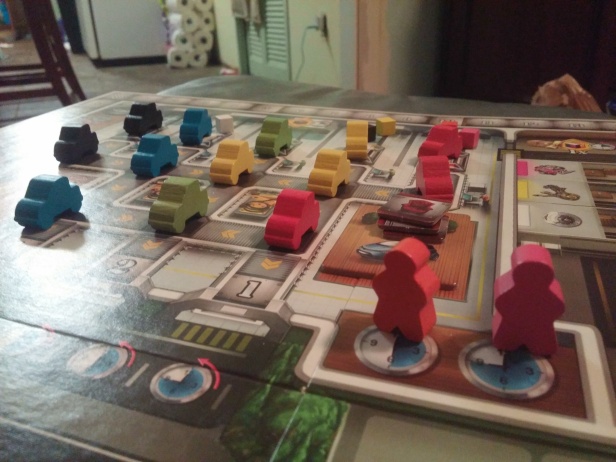 There are a couple reasons why I like the worker placement mechanism in Kanban, published by Stronghold Games, and why it’s at number 3.  You only have one single worker and only 5 areas to place that worker in, with two slots in each area.  The struggle of where I need to go, when and in what order is crucial.  There are 2 slots for each department and each slot has a certain amount of time that can be spent, in that department.  It is usually 2 or 3 hours you can use at each spot.  The turn order goes from left to right, the left spots being the lesser time slots.  So, the first decision you have to make is whether you want to do less actions but go first and guarantee you get what you want or go second and hope what you want is still left but get more actions.  Not only that but if you are playing the Mean Carissa game, you have to be aware of her and where she will go next.  If she is going to judge a department you are in, you may want to go before her so you can get ahead in the knowledge track before she hands out demerits.  There is just so much you have to consider BEFORE you even do your actions that it just makes it a nice struggle. 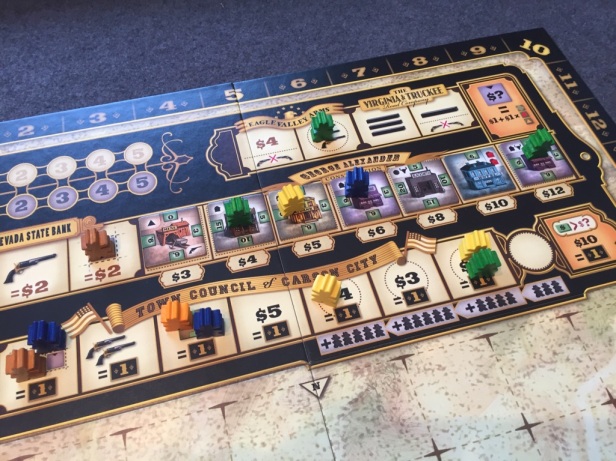 Eagle-Gryphon Games really offered something nice with worker placement when it comes to their game Carson City.  There is no blocking in this game.  Anyone can go to any space they desire.  They can buy buildings, purchase land, get roads, buy more fire power and cash in money for victory points…..but the thing is, every spot that has 2 or more cowboys on it….finds themselves in a little shoot out.  That’s right…when you are on a spot where there is another player you have to roll dice and add combat points to see who wins the spot and gets to take the action.  I love this spin on worker placement!  You have to decide if the spot is worth fighting for and possibly coming up with nothing.  If you win, the rewards are sweet.  When you lose, you tuck your tail between your legs and whimper away!  But if you don’t go after it, you’ll be as yella as a daffodil!  It’s just so fun to wrestle with your inner thoughts and the thoughts of other players on who is willing to stand back to back, take 3 paces then turn and shoot!

This is probably not a huge surprise if you have seen my Top 10 games of all time, but Dominant Species comes in on top.  GMT is usually known for their war games, so this gem by Chad Jensen is in a different universe yet has the same feel as war.  The true genius of this game is the activating order of the different actions.  I absolutely love it!  The action spots that you place your “worker” on do not activate until every one has placed all their actions.  I will probably get some heat for this one not being a worker placement game but again I am fighting for actions to do with my species.  Anyway, I love that the actions will then activate in order from top to bottom, left to right.  Not only that but the actions themselves are put in a specific way that makes you guess and re-guess and guess again on what other people are going to do and how you can capitalize on them and still follow through with your plan even though things almost never work out the right way.  I just love that the first actions are building up your species, then dealing with the land itself and finally moving to migrating around the land….it is just great!  You may have your plan all in place and half way through you A) realize you completely did the wrong actions for the plan you wanted to do or B) have to change your tactics due to what someone else did that you were not expecting or most likely C) both A and B happened.  I loved it since the first time I played it and still do to this day!